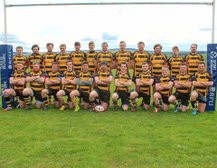 Castleford were the visitors to Cawkill Park yesterday and proved yet again what difficult opponents they can be. Earlier on the season the teams fought out a 14all draw, this time Dale held out to win 15 - 12.
Skiing season has arrived so unfortunately a few regulars were away 'on the piste'. Young scrum half Jake Taylor kept his place with 18 year old centre Jack lawson returning to the starting lineup. Fin Metcalfe filled in on the wing. Dale had the strengthening wind at their backs in the first half. From the off Castleford were hurtling into tackles, of course Dale didnt hold back increrasing the physicality level up a notch or two.
Both teams struggled in the set piece, easy to blame the wind for the lineouts. Not sure where to point the finger in the scrums. The number taken against the head was high, Dale took half a dozen. One brought a try for Taylor just before half time.
Winger James Ashford , fresh from scoring 5 tries at Sheffield Medics last week, added to his tally when he scooped up a wayward pass for the first try. This followed several drives to the line, a few tap penalties and finally the score. Given space Ashford has the pace to frighten most defences. His opposite man spent 10 minutes in the bin when he attempted to intercept illegally. Unfortunately Dale failed to capitalise on the advantage. Captain Jack Reynard slotted one conversion and a penalty putting his side 15 points up at the break.
Castleford came out once again firing on all cylinders soon scoring 2 tries and turning the game on its head. Dale reacted positively as the wind again strengthened followed by showers. Typical Wensleydale conditions and a typical Wensleydale reaction. Getting hold of the ball and keeping control reminded me of the Yorkshire 4 promotion game v Vandals where we had to score for promotion. This time it was to win a Yorkshire 3 game. Recycling the ball again and again and again, fantastic work by the Dale pack who rose above the visitors physical challenge to seal a very important win.
Fantastic effort all round, all hands on deck at the right time.
Man of the match went to Jake Taylor for driving his pack through 80 minutes of hard work.
Share via
FacebookTwitter
https://www.pitchero.com/clubs
Recent news