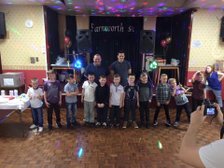 On Saturday 21st November, the Under 7's celebrated the 2015 season.

It was a very enjoyable night for parents, players and the coaches. Each player was rewarded for their hard work and effort that was shown throughout the season.

They were all given trophies along with some treats by the Widnes Vikings player Paddy Flynn. Afterwards there were some special awards to be given out. These included Parents Player of the Year, Top Try Scorer, Clubman Award, Most Improved and Player of the Year.

Parents Player of the Year was awarded to Logan Glynn Owen for his outstanding try scoring ability and superb work in defence.

Top Try Scorer was awarded to Ralf Roberts who scored some amazing tries this season and had a grand total of 58 tries.

Clubman was awarded to Owen Jones for his hard work and effort put in at training and on the pitch.

Most Improved Player was awarded to Finley Eastup who developed amazingly as a player throughout the season.

Player of the Year was awarded to Zak Bennett who really deserved the award for a phenomenal display in attack and defence throughout the season.

All players should be extremely proud of themselves as they are all becoming vital members of the team. Both coaches are looking forward to coaching them next season where they will be able to develop more and become better players.