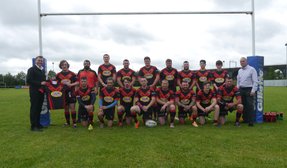 West Bank win the battle of the Bears

Two wins on the bounce for resurgent Bank

Showing several changes from last weeks win the Bank found themselves facing a confident Wigan side who were expecting to get their own season back on track at West Bank's expense.

The Bank took a 14-12 lead into half time but only after coming back from a poor start.

Player/Coach Ste Curphey lead with way with a fine hat-trick. Peter Clarke romped over the line for a double and Ellis Lewis, Craig Lawton and Shaun McWhirter also touched down. McWhiter with three and Curphey with two knocked over the conversions.

Craig Lawton was West Bank Man of the Match.

The Bears have their third home game on the bounce this week with the visit of Latchford Albion. This is a must win if West Bank ate to keep in touch with the play off positions.