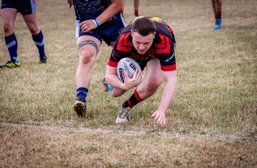 A below par performance was still good enough to snare the two points.

After the fireworks of the last few matches West Bank failed to rise to the occasion. This didn't look like being the case early on when in the first set of six the Bank moved the ball wide through Dave Jones who's pass put the charging Luke Willings away down the left. Willings drew the full back perfectly to send young Jack Penney careering in for a superb score. Matty Murphy converted.

Perhaps complacency set in but the Bears rarely got into second gear for the rest of the game and the visitors were soon on the scoreboard.

Making a rare appearance, Lee Lamb took a crash ball off Jones and showed what the team had been missing when he broke through three would be tackles to touchdown by the post. Murphy converted.

The Atoms again hit back but almost immediately Lloyd Hankin threw a succession of dummies to bamboozle the defence and restore the home team lead.

A period of calm descended on the game but Heysham crossed just as the half was coming to an end to leave the score at 16 a piece.

An early penalty put the Atoms into the lead for the only time but still West Bank couldn't quite find the spark and were reliant on the strong running of Daz Wilson, Ryan Millington, Willings, Hankin and Lamb for keeping them in the game.

It took the efforts of new signing Jamie Morris to save the league leaders from a surprise defeat when he took a ball off Willings and showed amazing strength for a young man to force his way over. Matty Murphy converted again tho save the Bears blushes.