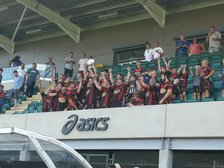 The Bears open age bring silverware to the club

West Bank’s progress into the final of the North West Men’s league cup had been relatively carefree with a big win in the local derby against Farnworth; two walk overs and a comfortable passage in the semi-final at Ashton.

A final tie against fierce rivals Thatto Heath Crusaders ‘A’ was never going to be a simple task and so this blood and thunder game proved to be.

The Bank started in brisk fashion with the pack imposing their presence from the off. The typical West Bank robust defence hammered into the Crusaders and a succession of strong drives took the ball close to and on several occasions over the whitewash. Only desperate defence, spilled passes and forward passes kept the Bears from hitting the lead.

Adam Lawton looked in fine form and it was he that ran onto a Ste McDermott pass to open the scoring on 15 minutes. Matty Murphy converted.

A dropped pass lead to a scrum down and Thatto hit back with a try straight from the scrum. Within minutes Thatto’s standoff’s superb kick through the line was gathered in one movement by the full back and with the both scores converted Thatto Heath were ahead 12-6.

West Bank were in no way set back and continued to press and strong runs from Ryan Bates, Josh Simm and Jack Murphy had the Crusaders defence back peddling and a nice pass from Matty Murphy allowed Karl Glover to force his way over from short range. The missed conversion left the Crusaders with a 12 to 10 half time advantage.

The second half remained scoreless for 25 minutes but despite being desperately close to scoring on several occasions, with one try being unluckily chalked off for a ‘forward pass’ West Bank remained composed.

The introduction of Lee Lamb added further momentum and a superb ball from Ste McDermott allowed Lawton to cross again. Thatto threw everything they had into rescuing the game but aggressive West Bank defence held the line to prevent a comeback. It was the Bears that took a stranglehold when Dave Jones stormed onto the ball and a big dummy allowed him to cross unchecked.

Lawton’s hat-trick score closed out the game and, fittingly, it was Ste McDemott who’s scoot and dummy from acting half back the created the space for the big man to romp over from 30 metres. Josh Simm converted.

The non-stop efforts of Ryan Bates saw him take the Man of the Match award.

After a barren year last season West Bank are back on the top table with a disciplined and promising display.

West Bank take part in a new concept with a 9-a-side competition to be held at HFH’s Wilmere Road ground this coming Saturday at 12.00pm.