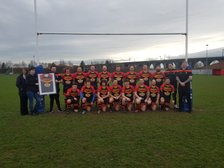 The visit of the National Cup semi-finalists from Barrow was a hard game to have to predict.

The home team’s white hot start to the season got off to a superb start with smooth passing seeing five pairs of hands put Lee Holland over in the corner.

Eddie McAdam scored when he stretched through a tackle after the Bears intercepted. Matty Murphy added the first of eight conversions.

Ste McDermott split the defence to put a side stepping Ryan Bates over.

Walney hit back through the sharp Declan Gavin.

West Bank got back on track when Bates turned provider as his short ball allowed Jack Murphy to touch down. McDermott wriggled over from acting half back before Holland finished spectacularly off a Lee Lamb pass. Half time 32-6.

The Bank continued to dominate but some clunky passing restricted the scoring but Walney generously spilled the ball at regular intervals.

The first of these saw Lamb snap up a loose ball and immediately feed Holland for another high speed effort.
Another Lamb interception saw Holland speed 70 metres and unselfishly feed Jack Penney.

Ste Curphey outmuscled three would be defenders to power over and Holland again ran 50 metres for the final score by the Bank.

The Cents finished the scoring and awarded Ryan Bates the Man of the Match.

West Bank visit HFH for the first derby of the season this coming Saturday.