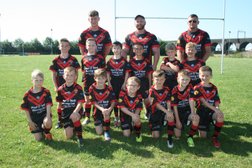 Quality win for the Bears!

Another bright and sunny West Bank morning was the setting for today’s game against visiting Leigh East Lions. Leigh East Lions were short on players today and so credit goes to Harry Nuttall, Lewis Lawrenson, Kio Batty and Myla Kelly who took part in playing against the Bears for the Lion’s, great job boys!

The game began with big drives up the middle of the field by Jacob Potter and Kio Batty. This was followed by a strapping run from Hayden McInerney, Alfie Ryan, and Oliver Edge. Luke Barnett tossed the ball out to Thomas Stanton, showing that this was going to be a great game of teamwork from the Bears. Myla Kelly showed his worth next as he dodged around the defence and scored West Banks first try. The Lions responded in their next set by also scoring their first try. Luke Barnett again when West Bank next had the ball off loaded to Jack who scored the second try for the Bears. Leigh were unlucky next as they almost scored but were defeated by West Bank’s defence on the line. We saw more determined running up field from Kio Batty, Jacob Potter and Oliver Edge. Luke Barnett again, off loading the ball when an opportunity came his way, led to Thomas Stanton scoring the third try in spectacular style. In Leigh’s next set we saw a text book tackle from the mighty Potter who took one of the Lions in a 1 on 1 tackle. During this set from the Lion’s they scored their second try. Alfie Ryan and Myla Kelly were like men on a mission as they powered through the Leigh defence before, whippet-like, Luke Barnett dodged around the Lions to score the Bears 4th try of the game. In the final set of the first ten minutes we watched as Hayden McInerney made a superb tackle as did Thomas Stanton who tackled the Leigh player into touch knocking out the corner flag in the process. The second quarter began with Thomas Stanton and Jack Egerton showing their worth in defence as they kept Leigh from scoring short of the white wash. Fantastic yards were made by a fired up Thomas Boyes in the Bears next set which was followed by Luke Barnett charging his way through the defence to make half a pitch worth of ground. Leigh’s next set after this saw them score their third try despite a valiant Bears defence. Oliver next had an amazing run against the Lions as did Alfie and Kio. Teamwork at its best next as Luke once again made an off load to Thomas Stanton. Luke again to Jack Egerton and then again to Jacob Potter who put try number 5 over in the corner! After this however, Leigh made it a tight game with scoring their fourth try. The lead was soon to be lengthened though by a sneaky little try by Thomas Stanton just on the half time whistle!

The second half began with Lewis Lawrenson and Harry Nuttall making good drives and pushing the attack forward with Hayden McInerney then speeding through the defence and taking the ball over for try number 7. No rest for Hayden McInerney as he also pulled off a spectacular tackle by tackling one of the Lions around the ankles, he was going nowhere without his legs! After this spectacle, Leigh were awarded their 5th try of the game, scored by the bears No. 2 Myla Kelly. In Leigh’s next stint with the ball Thomas Stanton saved a 4 pointer against the Bears by taking a Lion right into touch! In the last ten minutes of the match West Bank started as they meant to go on as Alfie, Hayden, Harry and Luke ran the ball in, Luke was on it as he scooped around the line of defence and put over his second try of the game. In West Bank’s next set Thomas Stanton went over for his hat trick of the match as he took an off load once again from Luke after superb running from Alfie and Thomas Boyes – outstanding team work! Leigh had the ball next but failed to score, due to exceptional support and teamwork and the interception from Oliver Edge right on the line. In West Banks final set of the game Lewis Lawrenson made a strapping run, followed up by Thomas Boyes and Harry Nuttall who helped out Thomas Boyes in the tackle. The final run in this set was up to the talented Luke Barnett who ran close to the wing, passed to Oliver Edge who, went over the line to score the final points of the game!

Once again a big shout-out must go to the four Bears who played against their team for the Lions. Harry Nuttall, Lewis Lawrenson, Myla Kelly and Kio Batty, superstars in the making!