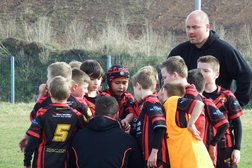 Father’s day feast for the eyes!

A lovely sunny Wigan was today’s venue for a father’s day feast of awesome rugby!

The first half of the game began with silent but deadly Luke Barnett running in two tries within the first couple of minutes, the second of which saw him spectacularly run half the length of the pitch! Judes were unable to keep hold of the ball in their next set and dropped it but was scooped up in style by Harry Nuttall who made great strides up the field. Great running next from Lucas Middleton and Luke Barnett once again who off loaded to Hayden McInerney who put over try number 3 for the Bears. Making his presence know next was the mighty Thomas Stanton, putting his mark on the game with his first of four tries. Good work by Jacob Potter and Kio Batty saw the West Bankers make good ground before, once again, Luke Barnett set up his team mate, this time it was Jacob Potter to score the Bears fifth try. Letting their guard down in defence slightly, West Bank gave Judes and opportunity which they took and scored their second try. The Bears almost completed a set of tackles next with superb running up field from Kio Batty, Lucas Middleton and Danyl O’Brien but it was on the fifth tackle that Thomas Stanton scored try number six. Just before the half time hooter, with nothing to stop him skipping in his hat trick, Thomas Stanton scored the 28th point for the Bears.

The second half began with West Bank piling on the pressure and Thomas Stanton, this time in defence taking his man into touch. Thomas Boyes, Lewis Lawrenson and Hayden McInerney made great strides in attack and then, scoring his hat trick of tries, Luke Barnett took the ball and was almost tackled just as he reached with all his might and putting the ball over the white wash for West Bank’s eighth try. Good work from Harry Nuttall, Kio Batty and Oliver Edge next set up and opportunity for Luke Barnett to run in try number 9 for West Bank. In Judes next set they looked sure to score but the amazing Thomas Boyes appeared from nowhere and stopped them in their tracks, he was a man on a mission today! The next pearler of a try from the Bears came from Hayden McInerney - after much hard work was made up the middle of the field by Harry Nuttall and Kio Batty, we saw – Super league style, Luke Barnett drop off the ball to Hayden who ran in the tenth try. Teamwork at it’s best! In West Banks next set in charge of the ball the crowd witnessed a beautiful try from Thomas Stanton who took a drop off from Luke Barnett and skipped over the line with the Bears 11th try. The game continued in similar style with fabulous teamwork and great camaraderie from the boys. A stunning try scored by Danyl O’Brien who plays a year above his age, another from Hayden McInerney, a superb 14th try for the Bears from Alfie Ryan and finally after (not for the first time in this game) an interception from Jacob Potter – who read the game perfectly passed to Lucas who scored a beautiful try to end the game.