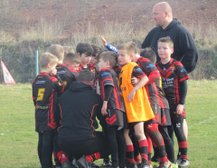 The weather this morning could have gone either way. With the sun shining over the Ted Gleave sports ground, the threat of rain was not very far away!
The game kicked off with St Judes in control and they began as they meant to go on by running in their first try with their first run of the ball. Powerful running was made by Kian, Shaun and Jacob but wasn’t enough for West Bank to score. In St Judes next set, they ran the ball in again for their second try despite valiant defence from Alfie, Luke and Lewis. Great defence from the Bears though, causing the Judes to knock on. But to finish the first quarter the Wigan side scored try number three, making it look like a whitewash was inevitable.
With a few changes to the team the second quarter began with West Bank in control of the ball, a great run from Jack to begin with led to an amazing run from Hayden who somehow avoided being tackled and put the ball over the whitewash for West Banks first try of the game. When the Jude’s next had the ball it was Thomas Stanton who prevented them from getting anywhere as he hunted down the man with the ball which inevitably forced a knock on. A great push from Harry in West Banks next set with superb team work from Thomas Boyes and Owen. A drop off from Luke to Hayden was a superb move which secured try number two for the Bears. With immense pressure from the Bears, the Jude’s made no great shakes in their next two sets with the ball but this was not the case for West Bank in their next set as great ground was made by Lucas and Jack, but it was the efforts of Luke who off loaded to Thomas Stanton who ran his heart out with two of the Jude’s on his tail but, there was no catching him as he hunted down try three for West Bank. A sight for sore eyes next as Jack Egerton took an interception from the Jude’s and ran almost the full length of the pitch to score the Bears 4th try. Despite the hard work of the West Bank defence the Jude’s next ran in their fourth try making it even stevens again. The draw didn’t last long though as Luke as ever, looking for options for West Bank, off loaded to Hayden, who in turn passed to Thomas Stanton who created, try number five!

The second half of the match started with St Jude’s scoring their 5th try. Kian and Alfie next showed their pushing power as they made good metres on the Jude’s and in their next set the persistent pressure from West Bank forced the knock on for the opposition. In the Wigan sides next set the crowd witnessed an incredible interception by Thomas Stanton who took the ball and ran but was caught short. It was then up to Kian Fahey who took the ball in a determined run and put the ball over the line for West Banks 6th try of the game. Despite first rate tackling from Alfie and Lewis the Jude’s next equalised with West Bank making it 6 tries apiece. It looked like the Jude’s were on the come back. In West Banks next set the Wigan side forced a knock on, superb defence from the Wigan side. Just at the closing minutes of the quarter it looked like West Bank may have taken the lead as superb defence from Kio, Hayden and Lewis seemed to cause panic in the Wigan camp and Myla, who saw an opportunity, took an interception and ran for the line. Unfortunately time was called on the quarter.
Still six a piece the game was anyone’s as the teams went into the last quarter of the match. With West Banks first run of the last 10 minutes, Jack Egerton took the opposition by surprise as he took the ball the full half length of the field and scored try number 7 for the Bears. Great tackling in the Jude’s next set from Harry, Oliver and Owen who wouldn’t let anyone through the line and superb pressure from Hayden forced a knock on. A knock on from the Wigan side on meant that West Bank picked up the ball on their own line with Thomas Stanton taking the ball the full length of the pitch for his hat trick and try number 8 for the Bears. Letting their guard down, the West Bank defence let through a try for the Wigan side who scored their seventh try. But, it was with a great run from Owen, who made great strides which led to Myla taking the ball, skipping around the line of defence and scoring the ninth try for the Bears. The Judes next set came to nought but the Bears last run with the ball was immense as Luke, Thomas S and Jack never gave up in their efforts. It was Lucas however (with superb back up from Owen) in the closing minutes of the game, pushed through the defence for West Banks tenth and final try of the match.