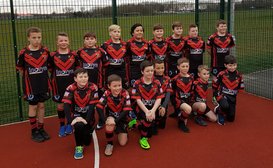 The Battle of the Bears

West Bank Victorious in the Monsoon!

West Bank Bears entertained their fellow Bears from Ashton in a game played in torrid conditions from start to finish.

Rain lashed down and a freezing chill was in the air but the weather didn't dampen the spirits of the young players and definitely didn't spoil the rugby on show.

Ashton were first across the try line midway through the first half after some conservative rugby early on, but the home side quickly replied with a great ball carry close to the line from Josh Swindley. Oliver Stankevitch kicked the goal to give West Bank a 6 - 4 lead after the Wigan side had missed their earlier conversion attempt.

Both sides continued to play safety first rugby as the first half drew to a close, but West Bank finished the stronger after couple of handling errors from Ashton gave them good field position and it was this field position which gave Josh Swindley his second try with another close range effort.

A 10 - 4 halftime scoreline in favour of the home side didn't last long as Ashton were straight out of the blocks in the 2nd half, scoring after an exciting movement of the ball. Another missed conversion saw the away side trail by 2 points.

West Bank then entered their best period of the match, in probably the worst conditions of the match, with the rain driving into the players faces. Hands were cold but that didn't stop some superb handling from the home side which quickly got them to the half way line.

Kian McGann then got his hands on the ball wide on the left and ran straight down the touchline, leaving defenders on the floor and scoring in the corner with a superb individual effort. The try was then converted by Josh Lawrenson to give the scoreline a slightly more comfortable look for West Bank at 16 - 8.

But quickly came Ashton back into the game, despite some valiant efforts from the West Bank boys, another try to peg back the home side.

With the game coming to a close and a score of 16 - 12, there was still time for more points and it was Billy Keeley who got the crowd cheering again after taking the ball in midfield and splitting the defence, powering past 4 or 5 flailing tacklers for another superb individual effort. Keeley himself goaled from in front of the posts to take the scoreline to 22 - 12.

Less than 2 minutes remaining and with both sides ready for the final whistle and their sausage and chips, Ashton produced their own try of the match with a great individual effort right down the middle.