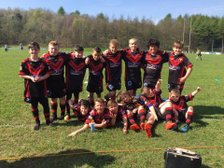 Perfect 6 from 6 For West Bank Juniors

In what we expected to be a tough challenge, the young Bears travelled to Oldham to play against a very good and well drilled St Annes side who pushed us in both of last seasons fixtures.

On a narrower pitch than usual and against a big pack, West Bank had to go toe-to-toe in the first 10 minutes of the game and despite some earlier pressure and a few unforced errors from the away side, it was the Bears who were first to break the deadlock.

The forward pack were leading from the front with some barnstorming runs and although they were finding yardage tough to come by, they continued to stick with it despite resilient opposition who refused to lie down.

West Bank were clearly in no mood for distractions and although Oldham tried to unsettle the Bears with the occasional infringement, it didn't knock the concentration and determination of West Bank and they finished the first half how they had started, with strong carries providing field position for a further two tries to be scored.

The home side were clearly rattled at the back end of the first half and their frustration at their lack of rewards carried over into the early second half in which a 22 player brawl erupted from what seemed like something and nothing.

After both sides had calmed down and been given a stern talking to by the referee and coaches, West Bank reacted quicker and with some superb dummy half runs from the outside backs, they split the St Annes defence and scored their fourth try of the game, which was richly deserved.

The second half continued to be a niggly affair and further frustration yet again spilled over into a full team brawl which threatened to spill out of control and jeopardise the last 10 minutes of the game. Luckily, both teams were able to see sense again and the game continued, with the Bears having the final say on the scoreboard with another very exciting team try in which the away side progressed almost the full pitch before scoring with a charge over carry.

5 tries were scored on the day by Kian McGann (2), Billy Keeley, George Hughes and Rueben Mafi, and with 4 successful conversions by Harvey Bennett, Josh Swindley, Lucas Hendry and Todd Dennett, the final score was a convincing 28 points to nil.

Man of the match was shared this week between front rower Rueben Mafi and scrum half George Hughes, and the Top Tackler award was a close run thing with Harry Hughes and Michael Lawton just being pipped by Rueben Mafi.