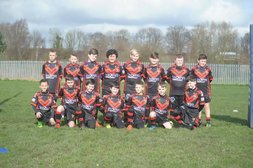 Tough Battle on the Moors for Bears U10s

West Bank Bears made the long journey to the outskirts of Oldham to play against a strong Saddleworth outfit that have so far been unbeaten at home.
Something had to give as the Bears approached the game with a perfect record of 11 wins from 11 games.

It started well for West Bank and in particular front rower Josh Swindley who charged over the line carrying 3 Saddleworth defenders with him for the away sides first try of the game.

Despite heavy rain prior to the kick off, the young Widnes boys showed some great handling to keep the home side on their toes and eventually this led to more good field position for the Bears.

5 tackles on the opposition try line saw the pressure eventually lead to the second try of the game, this time Swindley diving over from dummy half and planting the ball down with one hand.

The momentum was with West Bank going into the half time break but the home side had started to gain a little confidence after some strong attacking sets, but the half time scoreline of 10 - 0 was a fair one.

The second half began with the young Bears in the ascendancy again and dazzling footwork from Kian McGann saw him dance between and around 4 flailing Saddleworth tacklers to take the scoreline further out to 14 nil.

Saddleworth had enjoyed some brief spells of strong play but they just couldn't seem to break down the resolute defence from the Bears. It was this defence which restricted the home side's yardage and forced an error early in the tackle count leading to a handover on the half way line.

From the first play of the ball Kian McGann again danced past a handful of defenders and raced up field to score under the posts and take the scoreline with the conversion to 20 points to nil.

But the game certainly wasn't over and with 5 minutes to go Saddleworth finally got on the scoresheet after some lapses in defensive concentration on the Bears own try line. If that wasn't disappointing enough, Saddleworth then scored again on the final whistle to give them 12 respectable points, but not something the Bears were happy with.

Overall another strong performance on a tiny pitch which benefited the home side, but the win takes the Widnes youngsters to 12 wins from 12 games for the season.

Lots of on field and positional changes meant that the attack wasn't as fluent as it has been in recent games but all the player adapted to new roles really well.

Kian McGann and Josh Swindley shared the parents Man of the Match vote with 4 votes each.

Try scorers were Kian McGann (2) and Josh Swindley (2) with George Hughes and Rueben Mafi each kicking a conversion.