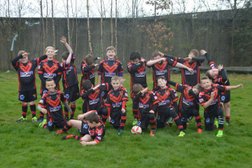 West Bank Bears U10s welcomed the City Roosters from Salford for a game that would be played in sweltering heat on Sunday morning.

The sun beamed down and the temperatures soared but the heat didn't sap the energy of the young players on both sides who produced a competitive and entertaining tussle.

The Bears hit the scoreboard first after some strong carries earned them a penalty when a Salford player interfered at the ruck. Soon after they found themselves on the try line and front rower Rueben Mafi powered over from close range.

The first 10 minutes was tight and largely error free with both sides respecting possession. Salford were next on the scoreboard however after a directionless attacking set from the home side which ended in a turnover on the halfway line. This played into the Roosters hands and particularly their athletic backs, with  one of their wingers getting the ball on tackle 4 and skipping through 3 poor tackle attempts to the try line.

The first half came to a close with a player from each side taken from the field when tempers flared, but this didn't affect the home side who continued to run hard, and this led to the Bears 2nd try of the game through centre Billy Keeley.

The second half saw lots of interchanges for West Bank as the forwards particularly started to tire in the conditions.

Smart calls from the home side halfbacks saw the team take a more back orientated approach to play, with dummy half runs dominating.

This caught the away side out in the first few sets of the 2nd half and led to opportunities to get further points but credit to the Salford boys who worked hard to keep the score difference to one try.

Eventually the pressure told and after a solid attacking set out wide, and a great pass from Josh Swindley, second row Michael Lawton scored in the corner to give the Bears what they hoped would be breathing space.

But that wasn't to be and a combination of determination from the away side and a little fatigue from the home side, Salford scored again to pin back the scoreline. A try that West Bank were disappointed to concede as it was against the run of play.

The last 5 minutes was the toughest period for the weary bears who had given their all, and they had to defend set after set on their own line. But they have shown in previous games that when they are under pressure they really come together as a group and again this showed through to keep the Salford side out.

The last set of the game saw the Bears march up the field, spurred on by the vociferous parents, and score the final try of the game through a nifty individual effort from centre Kian McGann.

Successful conversions by Kian McGann and Lucas Hendry saw the Bears run out 20 - 12 winners which takes the unbeaten youngsters to 13 wins from 13 games in 2017.

Parents voted for both Lucas Hendry and Tyler McGann to share the Man of the Match award after both wingers put in heroic displays.

Both players were also topping the tackle count this week with Lucas edging Tyler out by just one tackle, but 29 tackles between the two lads which was fantastic.

Another great victory which was a bitter pill to take it seemed by the opposition parents, who I think expected their boys to turn over our lads.

The young referee handled this highly competitive and emotionally charged fixture superbly and made the correct decisions at the right times.