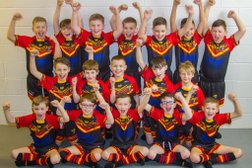 West Bank Bears U10s entertained Folly Lane on a sunny and warm morning in Widnes. The away side travelled to the Bears on the back of some mixed results this season but we knew that that we had to be aware of their attacking threat after they scored 18 points against us earlier this season.

The game started poorly for the home side who still looked half asleep, and Folly Lane took the opportunity to score in their first set with the ball after some slack defence out wide gave their pacey winger plenty of space to run into.

Unusually, the Bears failed to react to and after a confused attacking set, the ball was turned over and the away side marched up the field yet again. Individual West Bank tackling left a lot to be desired and it was only last ditch tackling which kept the away side from scoring try number 2.

The home side slowly settled into the game as the half progressed and their attack was coming together. Eventually resulting in West Bank playing the ball on the opposition try line and diving over from dummy half, which gave them a 6 - 4 lead which was against the run of play.

Folly Lane continued to throw the ball around and the Bears were chasing shadows at times, yet again, only scrambling defence from individuals saving the day.

As the first half came to an end, the West Bank lads finally got their heads on the game and looked much more threatening with a mixture of strong carries and fancy handling out wide. The pressure told on Folly Lane and the Bears scored out wide to take a 12 - 4 lead.

But Folly Lane took offence to that and roared back almost immediately, after more poor defensive efforts left gaps all over the field, and they brought the scoreline back to 12 - 10 going into the break.

After a stern talking to, mainly about attitude, the home side came out all guns blazing and played their best rugby of the game for 10 minutes.

3 tries were racked up in this period, all benefiting from the powerful forwards who looked much more determined this half.

The backs as always pushed really well in support and nifty passing and offloads were difficult to handle for the away side who began to look like they had put their cue on the rack.

At 28 - 10 it looked like the game was over for the away side and when the Bears scored another it was almost certainly finished with only 5 or so minutes on the clock, wasn't it?

Unfortunately for West Bank, a tough week of training and a team bike ride yesterday had finally taken it's toll, some weary legs saw the game produce a tense finish, with Folly Lane powering back with two late tries that the Bears were very disappointed to concede.

A game of one on one poor defence had made it a much tougher morning than it needed to be for West Bank, but full credit has to go to Folly Lane who certainly gave the home side the run around and produced some very strong attacking skills throughout the game.

A final scoreline of 38 - 22 meant another win for West Bank but they lads know they will need to be much better defensively in next weeks local derby.

Overwhelming parents Man of the match went to centre Billy Keeley who was the standout in both attack and defence. Top tackler went to prop Michael Lawton who worked his socks off.