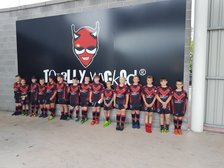 The Bears U10s made the short journey across town to face a confident Halton Farnworth Hornets U10s who had been rejuvenated by their recent results.

But the West Bank youngsters were also in a positive mindset and looking to continue their unbeaten start to the season.

The game began in the sunshine and it was the home side who were straight out of the blocks and soon 6 points up after some poor right hand side defence saw the Hornets attacker shrug off 2 tackles and race 50 metres to the try line.

That was the Hornets only real positive from the first 20 minutes as the Bears reacted in tremendous fashion to go on the rampage for the rest of the first half.

A mixture of powerful forward sets and up tempo backs play had Hornets on the back foot for a full 15 minutes in a relentless and ruthless period of play in which the Bears scored 5 tries to go 28 points to 6 up at the break.

It wasn't just one out rugby on show either, as the away side stuck perfectly to the game plan and it reaped the rewards.

The half time team talk was all about winning the second half on the scoreboard and keeping defence even tighter than the first half. But that quickly went out of the window due to the bounce of the ball.

A last tackle crossfield kick from Hornets close to the Bears try line caused confusion and nobody in the West Bank ranks put their hand up to claim the ball, allowing it to bounce awkwardly but straight into the chasing Halton players hands.

A lucky break for the home side but one which didn't dent the confidence of the West Bank youngsters who quickly settled into the second half and soon got back on top through hard work and determination.

Crunching defence was limiting the home side yardage and forcing mistakes which led to good field position for the Bears, resulting in yet more tries as the away side began to run away with the game.

At 48 - 12 the game was effectively over as a contest and it was a dominant team display and also a morning of individual brilliance with some superb individual attacking prowess on show.

As the game entered the final stages and with both sides hitting the wall, a tit for tat spell saw both sides score tries which they would normally defend with ease, but after a draining morning in the sun, the young kids can be forgiven, as they had their all throughout.

Parents Man of the match was awarded to winger Tyler McGann who was superb in every involvement he had both in attack and defence.

Top Tackler was opposite winger Lucas Hendry to made 17 tackles in the 40 minutes including both try savers and crunching front on hits.

Coaches award was given to halfback George Hughes for his unselfish play, which brought his team mates into the game when he could have been selfish and took on the defensive line himself.