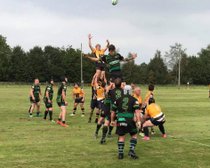 After 20 months with no games due to Covid restrictions, Westbury Rugby Club were able to welcome Wincanton RFC for a friendly match at Knott Field.
Both clubs were introducing new players to their line-ups and it was agreed to play the game in 4 quarters so that the respective coaches would have the chance to experiment with moving players to different positions and change the style of play, to allow them to find out where and how the new players would fit into the team. Although Westbury have had several of their senior players “hang up their boots” the club have signed 10 new players, 7 of whom were on show on the day.
The match was played in a great spirit of free-flowing rugby and although Westbury won the game by a large margin, Wincanton proved to be tough opposition making the home team work hard for the win.
Westbury club would also like to thank the large number of supporters both old and some new, who came to support the club. All in all, it was a great day where the overall winner was the game of Rugby itself.
Westbury Rugby are always keen to welcome new players, whether you are a current player or looking to pick up the game again after taking a break from playing or you just want to get fitter. Training is on Thursday evenings at 7pm at the White Horse Country Park (just follow the signs to the rugby club).
For more details email westburyrugbyclub@gmail.com