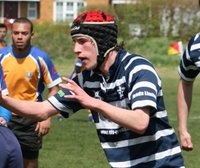 It is with great sadness that we need to announce the death of Paul Bagnall, aged 18,....

....on Tuesday 7th January, through an extremely unfortunate and tragic accident.

Paul was part of the Westcombe Park RFC Under 18 squad within the Academy and had been an active club member for many years. Paul represented Westcombe Park throughout his time at the club, being part of the very successful Wildcats squad and had played U18 league rugby this season, with his last match being against Beckenham on December 1st.

Paul was an extremely popular member of the squad and had lots of friends within it, always having a smile on his face. He was always very enthusiastic about his rugby, a sport he loved along with karate, in whatever capacity or position that he was asked to play, be at full back (when he was younger) or more recently in the back row and 2nd row, even once at hooker last season. This pleasure was evident in one league match this season where he made up the numbers for the opposition who were short of players and was consistently the last player up from every ruck, resulting in their coach telling his team that they should all be playing like Paul !

The funeral will be held on Monday 27th January at 2.30pm and will be at Kemnal Park Cemetary (A20 Sidcup Bypass, Chislehurst. BR7 6RR). The chapel can seat 180 with room to transmit to another 500 outside and if people would like to attend, then all would be welcome and room found. This is to be a celebration of Paul’s life and as such his family has requested that black is not worn to the funeral.

Paul will be sorely missed by his fellow players and coaches from within the club and our thoughts and sympathies go out to his family.

A photo album from Paul's time at Combe can be viewed here.