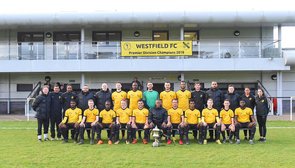 Double Brown as the Foxes Downed

Westfield recorded their 5th successive league victory and in doing so returned to the top of the table as they cruised to a 3-0 win over Farleigh Rovers at Woking Park.

With Liam Parrington Will Coppard and Shane Cheeseman all missing Westfield shuffled their pack but were still too strong for their Croydon opposition who in truth rarely tested Paviour in the Westfield goal during the 90 minutes.

With the winds more suited to sailing than a game of football Westfield created their first opportunity on 9 mins when Keer’s free kick found Shaun Brown at the back-post but despite having one of the longest necks in non-league football the returning Westfield skipper saw his header fly wide of the back-post. It mattered little however as 3 minutes later another Will Keer delivery saw Charlie Newman’s diving header somehow creep in beyond the keeper and man stationed on the post to give Westfield an early lead. The opening stages saw the home side dominant which was to be the theme for the remainder of the match. Rob Jones twisted into the box after a quick free-kick but saw his shot tipped onto the post by Richie Bull in the Farleigh goal. The keeper again had to be at his best to deny Sam Black on 25 min’s when the striker latched onto Beale's long throw but the keeper smothered well at point blank range. Newman nearly doubled Westfield’s lead shortly before half time but his flying header from another pinpoint Keer delivery this time fizzed just past the post.

The visitors started the half better with a couple of ventures into Westfield’s penalty area but on 51 minutes the lead was doubled. The Farleigh defence again incapable of dealing with Keer’s delivery and Shaun Brown prodded home with his thigh at the far post. James Paviour was called into serious action for the first and only time on 65 min’s but he was down quickly to save well at his right. Westfield should have wrapped the game up on 70 minutes when Jones released Brown and after rounding the keeper saw his shot cleared off the line, the rebound came back to Jones but Bull reappeared out of nowhere to somehow tip the ball over the bar. Westfield did however find a deserved 3rd near the end when Jack Hollins who again was superb all match clipped in a cross from the left which Shaun Brown flicked on (allegedly) and the ball nestled in the far corner. The visitors had their best chance in stoppage time but the shot was dragged wide of the left hand post with just Paviour to beat.