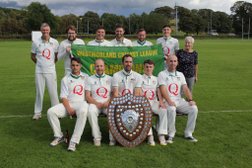 When the going gets tough, The Rust gets going

The top two teams in WCL Division one both put their 100% starts to the League season on the line, in an evenly contested battle at Cross Hill Park on Saturday. On a flat looking surface Warton skipper Finney had no hesitation in batting first in looking to set a decent target. Things did not get off to the start they had wished though as they slumped to 50-7. Dylan Conroy (2-26) provided the initial breakthrough, but it was Garry Tattersall (3-34) who did most of the early damage taking three of the top five victims. Once he had shrugged off the looseness of his first over he turned the screw from the bottom end with a spell of 3-12 in 9 overs. As wickets tumbled from the other end the class and patient Ryan Nelson (25) was looking for support as a lot seemed to fall on his shoulders. When he was bowled however by Andy Hill, the home side sniffed the chance of chasing a well below par score. As with all the top sides though, there is strength and depth to the Warton batting order. Captains present and past, Gareth Finney (43) and Graeme Crowther (22 not out) showed the middle order that the track held no demons as they added a chanceless 68 for the 8th wicket, bringing Warton right back into the game. The two waited for any bad balls and used their experience in batting time. Finney was unfortunate to be run out just missing out on a half century as he caressed 6 fours in his important knock. Conroy returned at the death to snare a wicket, and Andy Hill kept a lid on proceedings with 15 unchanged overs from the top end taking 3-22. Despite the last three wickets falling for just 3 runs, the 8th wicket partnership sprung the game into a real nerve jangling total, leaving perhaps both sides content at the break.
Once again the Achilles Heel of The Westgate season reared its head as the top order all failed to add anything significant. At 19-4 Westgate found themselves in a losing position for the first time in the game. The initial catalyst for the collapse was Steven Beck (4-31) as he and Crowther (2-31) found some good lines and lengths early on. The Warton pair took advantage of some loose shots and impatience and got Warton right back into the game. Westgate were in need of some crucial runs at a crucial time, and it was Ryan Speak alongside Dylan Conroy who added some calmness to proceedings. Doing the top orders job they took the sting out of the game, surviving numerous enthusiastic appeals, before going onto flourish in a match winning partnership of 82 in 20 overs. Speak in particular, buoyed by the importance of the situation, capitalised on any bad balls as Warton searched for backup to the two opening bowlers. Conroy (26) was the more circumspect of the two, but his role just as important, while Speak (53) crashed 7 fours and 1 six during his match winning knock. At 101-4 they then both fell relatively quickly and as Beck returned to the attack, there were a few more nervous moments for the Westgate side, however with a little bit left in hand they were able to slowly get to the winning line with Sam Frith (8 not out) striking the winning boundary. A good battle between two evenly matched competitive sides.