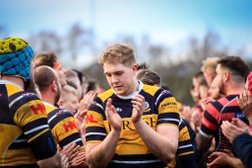 BP win at home keeps Wests alive in the league

Wests were back at home knowing a bonus point victory was required to keep them alive in the fight against relegation. Support was out in force with West Leeds hosting a ladies day and Mark Calderwood arriving the earliest he’s arrived to a game all season.

Wests kicked off and Pock ran the ball back, WL defence was equal to it though and eventually forced a knock on at the home 22. Wests secured the scrum ball and then when the scrum had stopped the visiting tight head cruelly attacked all round nice guy Dan Baxter, luckily the referee saw this and immediately dispatched the visiting man to the bin.

Wests were unable to capitalise on this immediately though, as the next score belonged to Pock when they set up a rolling maul which advanced 20 meters, an unnamed forward thought that the maul had splintered off, the ref did not. 0-3

Eventually West were able to take advantage of having an extra man and having kicked the ball to the corner they set up a maul which was stopped just short. Dom Walsh was quick to identify the chance out wide though and threw a perfect miss 1 for Jack Marshall to touch down in the corner. 5-3.

The next score arrived when Sam Neave raced off the try line to make a tackle on the visiting 10, unfortunately for both Sam and the away fly half the pass from his scrum half was particularly low, Sam’s meaty hit was high and he was sent to the sin bin, and the visiting 10 taken for a HIA. 5-6.

Having been told in the warm up that we could expect Eliah to keep scoring tries from our own 22, Eliah scored a try from our own 22. Ben Stringer combined with class on grass Dan Baxter to turn the ball over in our own 22, stringer passed on to Duane Smith, who drew the last defender to set Eliah away up the wing. Eliah scorched away from the covering defence for an excellent score. Conversion was missed. 10-6.

Almost immediately from kick off Pock closed the game further to take the score to 10-9. No idea what the penalty was for now, so as is tradition we will blame Will Betts.

Wests were back in control a few minutes later though when Duane Smith broke up field (again), racing 40m before passing on to the supporting Mark Calderwood who skinned the defence for a try almost in front of the posts. To keep things interesting Campbell also missed this kick 15-9 – Please can we let Jack kick next week.

The fact that the next score was vital was obvious to both sides and Pock took the game to the home team, battering away at the home try line. Wests however were able to exit when a huge hit, followed by a turnover from Mark Calderwood provided the opportunity to clear. The visiting winger collected the ball, and when trying to pass to his supporting player he inadvertently shipped on to captain Sam Neave, who raced away for a try – again unconverted 20-9.

The next moment of note came 6 minutes from time, when a Pocklington prop went down with a really serious injury, play was stopped, physios from both teams were on the pitch to help. After around 15 minutes he was moved on to a stretcher in a neck brace and an ambulance was called – we all hope that the injury is not as bad as it seemed and news from Pock indicate that this is the case.

To restart we had a scrum, Wests secured good ball and John Shed picked and ran fiercely in to the first man he could find, unfortunately this was Dom Walsh and a penalty for crossing was awarded and taken quickly. Defence scrambled but Wests infringed when George Carpenter was deemed to have knocked the ball down deliberately at the side of a break down and was awarded his 5th yellow card of the season.

Eventually the man advantage paid off and Pocklington crossed in the corner. Tim Pickersgill still suffering from PTSD after the Bridlington results exclaimed ‘oh no its happening again’ over and over whilst stamping his feet on the ground. 20-14.

Fortunately, it was not happening again and Wests saw the game out to secure a vital 5 league points.

Man of the match was Duane Smith, for making endless breaks and assisting in 50% of the WL tries, although he still hasn’t scored this year.

Other points of note include
Sheds huge break from the back of a scrum, but I can’t remember when it happened and if it lead to anything.
Will Betts picking a boyband for the playlist theme of ‘any song by a woman’
Campbell Breakwell finishing second in a best looking vote by the ladies

Next up is Driffield away for both the firsts and seconds – pirate bus, rum and pirate attire required, if you’re wondering why they’re needed its because they arrggghhhh.