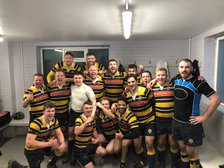 Wests visited Bramley for an Aire-Wharfe cup tie, the mid week game boosting players available, a struggle for the 2nd XV this season.

Wests raced in to an early lead when Aaron Lomiiko crossed for a converted try after a number of strong carries from the pack. 0-7

Bramley then scored two converted trys, I remember one was under the posts, no idea about the other. 14-7

The next score was to WL, when Pat Marren ran straight over the would be tackler to dot down in the corner, his winter bulking regime paying dividends, conversion was missed. 14-12.

The second half saw Wests lift the pressure and they enjoyed the majority of the territory, competing well and winning all of their own lineouts, apart from the one Rab threw horrendously not straight.

It was some time before the pressure told though, Bramley were slowing the breakdown at every opportunity, taking a long time to roll away and putting hands on the ball, eventually the ref lost patience and awarded a penalty in front of the posts, WL taking the easy 3. 14-15.

A short moment later and Kieran Foster-Matthews scored in the corner after a good break by Sam Marshall, conversion missed. 14-20.

There was only a few minutes left and WL were looking to see the game out, however Bramley caught everyone out with a kick off to the 'wrong side' which sat up nicely for the onrushing Bramley attackers to collect and take up to the line, the defence scrambled but wasn't enough as the home side crossed under the sticks for a converted try. 21-20 with only moments remaining.

There were worries that the chance had gone, however, good running by Sam Manson and Andy Hall put WL on the front foot, Rab Watt scooted round the side of a breakdown to put Wests in the away 22 before John Marshall eventually powered his way over under the posts for a converted score, snatching victory. 21-27.

Man of the match as agreed by the spectators was Andy Hall, for making ground every time he carried, and taping his top lip back together, rumours are that Andy's powerful performance was due to the chance of wearing the number 4 shirt in front of his hero.

Other honourable mentions include Spud and Thommo playing at the combined age of 107, several trips to the spearmint rhino by the visiting side and a deft kicking display from the visiting fly half.

Next game is the combined bus trip to Driffield - don't forget your Rum and pirate attire.