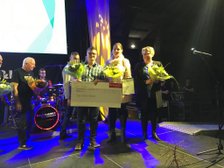 The two clubs signed the partnership last year and since then coaches from both clubs have visited each other, taking sessions at the other club and exchanging ideas on junior development and coaching.

The partnership focuses on the junior players and their development at both clubs. Vidar-Ulkebøl have over 300 players from 3 to 15 years-of-age, but have links with HF Søndeborg where players can continue their development to the top level.

West London Eagles has male and female teams in both the Under-16 and Under-19 EHA national leagues, as well as running a County based programme for younger players. This season all its junior teams reached the semi-final stage of the national championship, with the Under-19 women and Under-16 boys through to the finals on 11-12 May.

In addition to the coach exchanges, Vidar-Ulkebøl also plan to visit London with several teams in the Autumn.