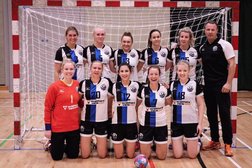 Second league win in a row for Eagles women

The game started out well for the Eagles. Anette in goal decided to not let anything past her in the beginning and her teammates were happy to run a couple of fast breaks on the back of her saves.

Kasia and Sunni took it in turns to score the first couple of goals from either side of the court with Maria scoring one from the line in the middle. An established attack, Victoria got in a few distance shots making the score 9-3 to the Eagles at half time.

In the second half, the Eagles started to drive and picked-up the speed of the ball which created more opportunities for players to break through. Maddie and Amy both scored two goals each against their old team. Noelly followed up with some beautiful wing shots. In attack, everything was working well and the Eagles played good handball, scoring from every position.

In defence, Anne and Anais had firm control over the Loughborough players, though the home side kept fighting despite the goal difference and got a few great goals in from distance and the wing on the left side.

We wish Loughborough the best of luck in the University Championship.

This was also the last game for Anais who will travel to Australia soon. We’ll miss her loads.