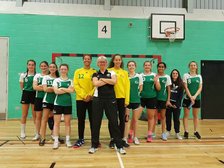 Six points for U19 Girls as their league campaign finally begins

After a long wait the girls had their first official match of the season against Medway Falcons and picked up a further 3 points from a forfeit from Islington.

Coach Mel Chowns had a full strength team to pick from but Elly Stonebridge was carrying a slight knee injury so it was important to get off to a great start in the match against Medway in case Elly had to be rested later on in the match. A great start is exactly what the Eagles got with the team quickly moving into a 7-2 lead half way into the first half. Eagles were working with a concentrated 4 block central defence to force Medway to shoot from distance, knowing that in Akira and Rhiannon we had two very strong goalkeepers. Eagles were able to also steal interceptions leading to a steady flow of fast breaks which Tyler and Zoe happily converted.

In attack, Eagles had some good collaborations between the backs and wings with Elly setting up Tyla on numerous occasions, leading to Tyla scoring 6 goals in this game. Zoe continued with her good form with 7 goals on the left wing and in fast breaks, ably backed up by Didi and Holly with five goals apiece.

Medway’s threat mainly came from their GB U19 playmaker Naomi Bell who was a constant threat but the defence managed to restrict her opportunities and Didi in particular did a great job of blocking Bell’s trademark side arm shot.

Eagles continued to dominate in the second half and ran out comfortable winners 29-14 to get their first 3 points of the season.

With the game against Islington awarded to West London Eagles 10-0 on forfeit, there was an opportunity to play much fancied Stroud in a friendly. Elly was rested for the game, which gave Iman and Simran more court time. Stroud played a much faster attacking game than the Eagles and this led to them having a half time lead of 7 goals. The aim of the second half was to improve on our poor technical error count, with many of the girls struggling with the amount of sticky resin on the ball and to be better at return running to prevent the Stroud fast breaks.

There was a big improvement in the second half, with Stroud taking it again but by only two goals and for most of the second half Eagles matched Stroud goal for goal. It was a great opportunity to see the level we must aspire to if we are to progress beyond the playoffs.

The top four teams in this league will go to the playoffs, so 6 points from two games is just the start we wanted.