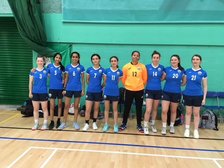 U19 girls fought for a draw

This season has seen a lot of new players joining, plus some ongoing injuries and one retirement from last year.

The second game was against Poole Phoenix, another fast developing club making a name for itself in the junior age categories. Eagles started brilliantly in the match with Lacour and Sartain combining brilliantly on the right side and Vass running rings around her defender to score some great goals from the left wing. Eagles started to build a lead and Mel Chowns could sense that a first victory of the season could be on. Apart from some poor defending immediately after we scored a goal, the defence was really holding up well but there was always danger when the impressive Edwards sisters had the ball. They would both end up scoring almost all Poole’s goals between them and were a real threat. Eagles however had a great first half with Bella Bujosa-Armora growing in confidence and tricking the Phoenix goalkeeper with smart shooting between the goalies legs. Eagles went in at half time 15-10 up but there was always the sense that as we tired, the game would never be done and dusted. The second half saw the Edwards sisters really challenge our defence and we were often caught flat footed which led to a string of 2 mins and our defence vulnerable. Despite great efforts by Adeniran-Lowe in goal, Poole gradually worked their way back into the game and saw them take a lead with 2 mins to spare. Eagles to their credit stayed calm and Bijosa-Armora snatched a late equaliser which was the least we deserved to end the game 24-24. The game also saw another debutant Roshni Patel score her first goal for the club whilst Lacour and Vass with 6 goals each and Sartain with 5 led the fight for Eagles. The game was so very tight that Chowns didn’t feel able to give all the players as much court time as she would have liked but on balance this was a very encouraging start for this new look West London Eagles U19 team.

Player of the match: Petra Vass