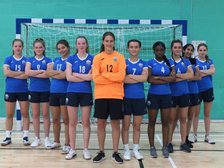 On paper the second game promised to be easier.

On paper the second game promised to be easier as our opponent Bucks Bullets was comprehensively beaten by Olympia who'd we beaten in the first round.

As often is the case, reality turned out to be quite different and we really struggled to adapt to Bucks Bullets novice team's scrappy play. A lot of clumsy mistakes as well as more annoying elbowing, kneeing and a bit of attitude on court destabilised us and as a result we were only 4 goals up at half time.

In the second half, we regained some composure, converted more opportunities and finished with a seven goal difference 15-8. Despite the heads down and Nikki being badly kneed in the stomach in the second game, it is mission accomplished with 2 wins out of 2 and more match experience for our young players.

A big thank you also to Alison for her driving and brownies which kept players and adults alike sustained, to Nicola (Lily's mum) who saw her first handball matches today, to Franck and Aurelia for driving, to Nancy for driving and to Franck for refereeing the 2nd game.