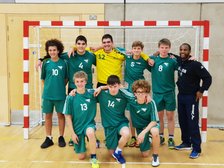 Eagles U16 boys recorded two convincing wins in their opening National U16 League matches against Brighton and Chelsea. The Eagles U16 boys were in action at St Mary’s University, Twickenham, on Sunday as the Under-16 National League got under way.

Three boys were making their league debut in the new look team since the merger with Ealing, but they showed no signs of nerves.
The opening match was one way traffic as the highly focused Eagles hit Brighton with a wave of fast breaks, while Rodrigo Dos Santos Moniz kept a clean sheet in goal. The final score was a clear 42-0 win for the Eagles.  Alex Davis was top scorer on his league debut with 12 goals and was named player-of-the-match; everyone played his part and got on the scoresheet. Although the win was emphatic the players’ attitude was creditable to respect Brighton’s players on court. In the spirit of the game the Eagles were happy to play 6 against 6 as Brighton could not field an entire roster.
After the comfortable win it was important for coach Marc Fayemi to keep his players’ feet on the ground and make sure they went into the next match fully concentrated.
The second match against Chelsea was a tougher affair but Eagles again made a good start, helped by a solid performance in goal from Rodrigo Dos Santos Moniz and built up a 14-5 lead by half time. They maintained the pressure after the break to run-out 26-10 winners. Myles Gannon as a playmaker was setting the pace of the game while Tomasz Dos Santos Moniz was man-marked most of the game. Alex Davis was again top scorer with 9, while Sam Nuttall added 8 and Rodrigo Dos Santos Moniz collected the player-of-the match award for his numerous saves and accurate fast break assists.

The next League games for Eagles boys are on Saturday 6 October when they play Carshalton and Cambridge in Stoke Mandeville.