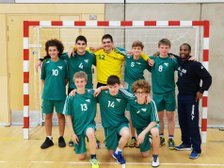 Eagles beat London Angels for their third win in the National League and maintain their 100% record to stay top of the table.

Eagles U16 boys travelled to Stoke Mandeville Arena, Aylesbury, on Saturday for day two of the EHA Under-16 National League.

With Carshalton and Cambridge forfeiting their games, Eagles were awarded 10-0 wins and the league match against London Angels, originally scheduled for 17 November, was played on Saturday instead.

Right from the start Eagles stamped their authority on the game opening a 3-0 lead, before Angels got one back, but from then on Rodrigo Moniz was unbeatable in goal and set-up numerous fast breaks. In defence Eagles constantly harassed their opponent, often stealing the ball and at half time the score was 20-1. With their control of the game, the second half was an opportunity to try players in different positions. The final score was 37-3 to Eagles, with every court players scoring.

Alex Davis and Tomas Moniz were joint top scorers with 10 goals each, while Sam Nuttall added 7.

Eagles are now guaranteed top spot in the South East pool and are through to the next round with a match to spare.

Eagles also then played a friendly game against Chelsea winning 21-13.