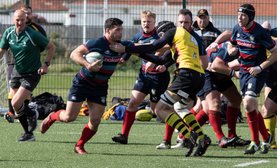 South Shields Westoe entertained Consett in the Durham County Cup on Saturday. After last week’s disappointment following their extraordinary performance, they would need to produce something similar against a quality side, currently playing one division up.

Due to the ferocity of the National Cup Semi-final the side saw inevitable changes to the starting line-up; however could still field a mixture of experience and youth in what promised to be another hard battle.

Consett started strong, controlling the ball and possession, albeit mostly in their own half due to good line-speed and up front tackling by Westoe. A Sam Seymour steal at the breakdown gave Andy Sutherland his first long-range attempt and he eased it over the posts for the early lead. 3-0

Consett came back with some threatening play, keeping the ball moving and the tempo high, Westoe’s wall of defence needed to put in a massive shift to break the play and prevent the score. Despite almost exclusive possession, Consett struggled to gain territory against the fired home side, with their best weapon being Westoe’s penalty count as it slowly mounted.

Consett held the advantage at the scrum and came close through fullback, Jackson, after a simple backs move created space in the corner allowed him to cross the line, only to be thwarted by a flying Luke Moffett, with a covering nuclear tackle that saved a certain score.

Fifteen minutes played and Consett’s pressure eventually paid off after a powerful scrum drive tied the back-row in allowing Grazier to pick from the base and cross for the unconverted try and the lead. 3-5

Westoe retook the lead minutes later with a second Sutherland penalty after Consett were adjudged to be offside at the lineout. 6-5

The game remained the same, with Consett controlling possession, Westoe controlling territory and the referee controlling the whistle. With only ten minutes left in the half, the home side had conceded seven penalties, already more than last week’s final tally, and received their first yellow card of the day, Andy Kirton being the recipient.

Consett took immediate advantage and after some dominant driving mauls and slick side to side passing, found the gaps for replacement Houston to re-take the lead for the second time. 6-10

The final minute of the half saw a Joe McKenzie steal set up a powerful run and superb offload to John Younghusband, who found Sam Gaff out wide linking well and playing the ball back inside to McKenzie for a well-worked converted try; also seeing the lead change hands for the fifth time. 13-10 HT

Consett continued to dominate possession with a fine display of the driving maul and solid scrummage; however the Westoe defence continued to harry and hassle them preventing much in the way of territory.

Westoe suffered an early blow to the half when hooker, Jamie Hughes was forced to leave the pitch; however Coach Graeme Smith stepped up and filled the breach for the remainder of the match.

Westoe’s biggest worry was the continuing penalty count and a second yellow card, this time for a Sam Gaff high tackle, allowed Consett to tie the match after twelve minutes of the half. 13-13

Down to fourteen men again, Westoe pulled off a great defensive set against the Consett side who battered the try-line looking to utilise the extra man advantage, but finding no way through as McKenzie, Kirton and replacement Graeme Smith led a determined home side desperate to protect their lines.

The final quarter saw possession and control shift to Westoe who finally had the lion’s share of possession and promising breaks from McKenzie, Kellett and Rumis were all stopped short due to the continuing penalty count against them.

Further attacks from Sutherland, Evans and McKenzie (again!) resulted in a scrum five, which was spun wide, McKenzie supporting the play and blasting through four Consett defenders for a superb score, retaking the lead yet again. 18-13

Consett never gave up and continued to attack; however despite some intelligent play it looked unlikely that they would breach the outstanding defensive performance of the home side.

Deep into added time, Westoe sealed the deal and despite being under pressure in previous scrums, shunted Consett back with ease allowing McKenzie to break from the base and cap off a superb personal and team performance to cross for his hat-trick, converted by Sutherland. 25-13 FT

A magnificent defensive performance from the side that despite an eye-watering twenty-one penalties and two yellow cards against them, managed to seal a fine win and set up an intriguing final against newly promoted Durham City.

Also good to see another promising performance from youngster James Long and a season debut for ex-captain Michael Potts who joined the Fire Service and has been unavailable due to training requirements.

Following the disappointment of their close loss in the National Cup, Westoe bounced back with another powerful performance and have every chance of lifting the Durham Cup when they challenge Durham City. Previous meetings have been close with home advantage winning through, so it should be a great final on neutral territory.