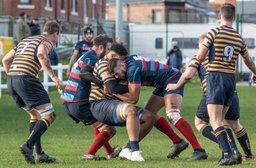 Coming into the game with one win each, this was set to be a close affair; however City came away with a comfortable points margin despite a closer competition on the field.

Playing against a stiff breeze, Westoe started strong, with both sides playing at a frenetic pace on the artificial surface at Blaydon. Westoe’s first opportunity came from a well taken line-out with a powerful drive which disrupted City’s defence and provided space for the backs; however an over-complicated move went awry and City’s Dominick was quick to scoop up the ball and speed his way under the posts for the converted score. 0-7

Undeterred, Westoe came back straight from the kick-off with Jamie Preston winning the ball in the air and mounting the attack. A Joe McKenzie grubber kick to the corner forced City to run the ball into touch for a Westoe line. A long throw to the tail of line set up another drive which was immediately brought down, but Sam Gaff spun from the rear to force his way over, tying the match on eight minutes. 7-7

With sixteen minutes played, City retook the lead after a quick tap was spun wide and with a Westoe defender coming up fast out of the line, City’s Stevenson spotted the dog-leg and darted through for their second converted score. 7-14

At this point the two sides were evenly matched, with Westoe shading the scrums and Durham looking particularly dangerous in the wider channels. City were strong in the line-out defence, an area where Westoe have excelled this year but struggled to get their driving maul functioning.

The two sides exchanged penalties and with less than ten minutes of the half, it was still anybody’s game. 10-17

Despite the fast pace of the match, City managed to further increase the tempo and unleash a period of manic attacking play, only being denied by some last gasp defence preventing scores even after they had crossed Westoe’s line.

City made good ground through fly-half Stevenson and created a series of opportunities for their two dangerous wingers, Bushnell and Pears, who came close several times.

Westoe briefly retook the initiative with an impressive play and looked to be in with a score; however were brought back for a forward pass leading to a City scrum. To add to the injury, City picked from the base and a good transfer made the space for winger, Pears to first go wide then cut inside for a tremendous converted score. 10-24

With the game in added time, City again attacked wide and although stopped short of the line, City’s support was there to recycle the ball and after a brief discussion between the officials were awarded the touch down, going into the second half with a nineteen point lead. 10-29 HT

Westoe now had the breeze at their backs and were still very much in the match, but needed to start well and cut out the little mistakes that had cost them dearly in the first period. It was City however that took the initiative and pretty much sealed the result directly from the restart. A clean catch led to a high box-kick, allowing winger Pears to snatch the ball mid-air, evade the retreating defence and offload to live-wire Dias who scored in the corner further increasing their hold on the match. 10-36

Westoe never gave up and the second half saw them play some controlled, direct rugby, dominating both possession and territory and creating several early scoring opportunities; however the City defence was solid throughout and with a high-risk defensive strategy managed to keep Westoe from crossing the line.

Durham received a yellow card for an offence at the ruck after a series of penalties within the red-zone and Westoe upped the pressure looking for a way back into the match.

With twenty minutes left to play Westoe kicked to the corner and mounted another drive, again stopped short by a determined City pack. A McKenzie drive was also stopped short, but Haydn Richards came on the charge and forced his way across the line to keep a glimmer of hope alive. 17-36

The final twenty was a testament to City’s defence who came under massive pressure from a fired up Westoe and snuffed out all attacks and won some good turnover ball and with the Westoe pressing for a consolation score deep in City’s half, they capped off a fine win when they picked off a wild pass and ran ninety metres for the score and the win. 17-43

A fast paced, entertaining match-up that was deservedly won by a strong City side who took an early lead from Westoe mistakes, went on to score a couple of tremendous tries and capped off the performance with a second half impressive defensive show. City were adept at shutting down Westoe’s line-out and tackled well throughout the side.

The game was considerably closer than the final score suggested and Westoe also played some cracking rugby, but today was not the fairy-tale ending they hoped for. Early mistakes cost them dearly and they may have fared better in the second half using the breeze and playing the territory game.

Despite the loss, Westoe finished the season again proving that a side can compete with home-grown players, a total of nineteen of the twenty-two man squad starting their careers at Westoe Juniors, a feat not often seen at this level.