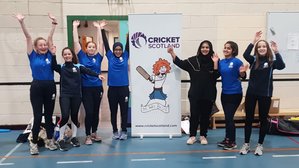 West of Scotland Women Win First Round of Wee Bash 3

West of Scotland Women kicked off the indoor season with a win at the Wee Bash at Hutchesons Grammar School in Glasgow.

The women's indoor cricket season began on Sunday 27th October in Glasgow, with West of Scotland out to defend their title.

The tournament started with West taking on Watsonians. Choosing to bowl first, West restricted the opposition to a low score with some tight bowling from Faatima, Emma and Emily. Openers Sophie and Helen gave the team a good platform in the chase with Moon coming in to finish off the game.

Next up were Edinburgh University. Once again the bowlers restricted the opposition to a low total with Faatima again taking a lead with the ball assisted by some sharp fielding from Helen and Nayma. Sophie made light work of the chase scoring the majority of the runs required in the first over scoring 29*.

Last game in the group stage was against Galloway, with the team once again bowling first and limiting their opposition to a low total. However this time, having lost Sophie early on in the chase, Moon and Nayma stepped up to see the game home

Having got through to the final with a 100% record, the team came up against Stirling CCC. Batting first this time, Sophie and Emma put on a great opening partnership with Moon and Nayma following this up and runs being scored at a rapid rate.

The bowling and fielding from West Women was too much for the opposition as they recorded a comfortable win in the final.

West are always keep for new women members, whatever your experience. Please get in touch if you are interested in trying the game.