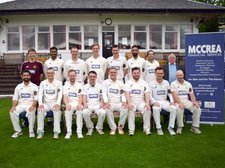 In typical Poloc conditions with a slow, low pitch and slow outfield, West got off to a strong start with a 46 run stand in 8 overs. Spin came on in the 14th over, eventually bowling 26 of West’s 39 overs.

Klienveld and Oliver put on 70 in 18 overs, keeping West well ahead of the rate. However, the next 11 overs cost 4-28 as no pair could build together. However, the rain came with West on 147-6 to close the innings.

Poloc’s revised DLS par was 137 and were 7-2 after 14 balls, quickly pushing the required rate above six. However, a 50 stand kept things rolling for Poloc, but the rate was climbing. Poloc looked to attack, scoring 42 in 42 balls.

Even at the increased pace, the rate was still now over seven. Everything went right for West: Good fielding and wicketkeeping, a poor shot choice under pressure and some fast, accurate bowling from Smith and Kleinveldt saw six wickets fall in 22 balls. The slim chance was killed and Poloc finished on 122.