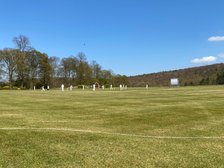 Londesborough Park win the first game of the season

First match of the season. Cold, sunny, dry but miles away from the theatre of dreams that is the Wetherby Oval. Great setting, brilliant ground, the opposition are a good set of lads. No one’s netted, no one knows where to go, sheep and cows are in attendance. Close game all round, a bowl of an outfield, a road we’d not played on before. Great first spot to pitch up and play. In essence, our first assessment of the league in this Covid adjusted league structure.

Worthy of mention up front was Jake setting off on Friday and returning on Sunday from the other side of Crewe just to provide his Umpiring skills for 90 overs (wearing shorts), providing Lofty with a Taxi service to the away club location most likely to be coined the “most far away from him ever” and additional services, such as providing Tweds with the ability to avoid pneumonia as addition. Not a bad “pitch in” from the big man who continues to be a legend.

Wetherby batted first. Ian and Andy turned out for the first time in living memory as an opening pair. Looking strong. Decent partnership and high hopes attached. One significant contribution with a few highlights to follow. Simply put, Ian who hadn’t picked up a bat in a year and a half, strokes a ton and makes everyone else feel like a talentless appendage. The bloke comes out with a stick of rhubarb and ….. well anyway you get the gist and nobody was bitter about it! Andy, H, J, Aidan and Rob all looked good momentarily with notable strokes of quality and brutality. Tweds hung around enough time to guarantee a decent amount of games out of Ian this year and Lofty watched as the Big Show delighted the crowd with his fireworks at the back end. 203 all out within the allotted overs. Two more overs of Waqar and Lofty and we’d have had 240 but to no avail. Was it enough? Well as it turns out no it wasn’t.

Half time beckoned and Thommo never disappoints - pulling out the big guns. The watermelon sugar high and the contents of his cool bag were both equally impressive. Team wide the consumption of Monster and all other brands of energy drinks were prevalent and excessive in part. Badly timed trips to the (local) shop at the halfway point left the whole team and the opposition waiting as Aidan and Jamie decided to just “pop to the shop” leaving the remainder of those attending to wonder if we were a tad shorthanded going into the second half. Thankfully they got back in time and put a shift in.

The fielding and bowling were a mix of promise, quality and disappointment.

Aidan dropping twelve bowler returns, tested consistently by Ian at first slip to see if he could actually catch. It started simply but ended up with eventual celebrations whenever he caught one. Saying that, Aidan took a vital but eventually none relevant catch in the game when it really mattered but by that stage the stone had already been cast.

Tweds forgetting that he’d fractured his ribs a fortnight prior and then wondering why, after 9 hours, the heavy dose of painkillers he’d consumed had exited his system and tried to save a run only to land on his rib cage twice. He also stole clothing. A stolen property embargo will occur before the close of the season. Well that or a car boot.

Jamie and Harry both bowled with accuracy and pace. Early wickets. They had front loaded their batting line up but Londesborough Park worked themselves back into the game for the third and fourth wicket - a fifty and a ton. Knocking the total off with just a few overs to go. Also noteworthy was one of their younger players Ollie Rook who bowled well and batted really well who pushed them over the line when Wetherby were really starting to put them under pressure and their ton maker had slowed down. Ian, Dave, H & J all should be given credit for tightening that screw. They knocked them off four down with only a few overs remaining eventually. Enough runs? No. They were coasting for a while but when you "push the tin" nerves set in making it eventually a competitive first game.

Disappointing though a first game loss is, it’s always good to get out on the field, play a competitive game of cricket on a decent track with a set of lads that want to win for each other. Duncombe Park at home next.