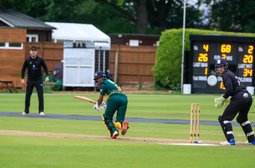 Davey leads from the top at Ashtead

Despite a much-delayed start at Ashtead on Saturday, we picked up a sixth win on the bounce in all competitions with an excellent seven-wicket win.

With a 3pm start returning a 30-over game, skipper Matt Laidman had no hesitation in asking the hosts to bat first, with his bowlers backing up his decision.

Jack Winslade wrapped up the Ashtead innings with two wickets in as many balls, thanks to smart catches from Kay and Odge Davey. Indeed, seven catches highlight an excellent all-round day for us across the game’s three disciplines.

“The delay was frustrating, of course it was, but it was very much out of our hands. All credit goes to Ashtead for doing everything to get the game on, and their ground staff did a brilliant job in that respect,” said Laidman.

“There are certain days when things just click, and Saturday was one of them. Harsh set the standard up front with probably one of his best spells this season, and he was back up all the way down.

“The fact someone like Ralph is coming back in and taking wickets like he did shows we also have competition for places.”

Ragu Aravinthan’s superb 44, from just 33 deliveries, was the highlight for an Ashtead side that struggled to rally around the innings of the 17-year-old, and their total of 143 was arguably 50 light.

Davey was in no mood to hang around as he opened up with Nathan Tilley, with his 52 from 42 deliveries laying the platform for a victory that propels us to fifth in the Surrey Championship table.

Both openers, along with van Heerden, fell in quick succession as the Ashtead spinners fought hard to stem the flow of runs, but a chanceless 70-run partnership between Nick Compton (40* from 46) and Laidman (27* from 32) got us over the line with just under five overs to spare.

“It had the potential to be an awkward run-chase, but Odge took a lot of the pressure off. We know he’s capable of that type of innings and it’s very difficult to contain when he gets going.

“We are starting to get into a position now when there are one or two guys in the side who are delivering an eight or nine out of ten performance, and that’s massive.

“There is confidence among the group now and we are looking forward to seeing how much progress we can make. There are two really tough games next week, but we’ll give it everything to build on the work of the past few weeks.”

This coming Saturday sees the visit of Banstead to the Green (12pm) as the league programme changes to timed cricket.

On Sunday we welcome Surrey Championship leaders, East Molesey, in a last-32 National Cup tie. That’s a 40-over affair, scheduled to start at 1pm.

This week’s cancelled Edwards T20 Cup tie clash with Sunbury will be played next week, with a date to be confirmed in due course.