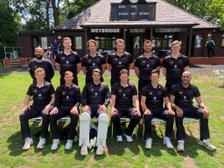 What a difference a weekend makes - two wins from two for Matt Laidman's side breathed new life in the 1st XI's season, with an opening Surrey Championship win kick-starting the league campaign.

After an 8-wicket triumph over near neighbours, Sunbury, on Saturday, a slightly re-jigged side travelled south for a second-round tie in the National Cup, against Southern Premier outfit, Burridge.

The result was almost identical. Bowling first, the hosts were restricted to 162 (three shy of the 159 Sunbury posted), before the men from the Green proceeded to chase it down for the loss of two wickets.

And for skipper Laidman - fresh in the role this year - the momentum generated will be key as his charges continue to face games, thick and fast.

"Winning breeds confidence, and we were in a little bit of a tough patch after the start we'd had. But we've managed to freshen up the side, and even though we lost at Reigate Priory, the performance was good.

"To go to Havant and win like we did is no mean feat, and that really got the group believing. We showed all sides to our game this weekend, with bat and ball, and now it's case of building on it.

"There are so many games to play, and everyone is eager to stick their hand up. We've got Worcester Park in the league T20 competition on Wednesday, before a really tough one against Wimbledon this weekend but we're ready for it."

Weybridge boast a good recent record in National KO, having been semi-finalists in 2016 and quarter-finalists in 2019, and the win at Burridge now sets up a mouth-watering last-32 contest at home against East Molesey.

Henry Chapman and youngster Ollie Jansen joined the bowling ranks on the Sunday, but it was Josh Van Heerden who stole the plaudits, his right-arm off break scalping 3-16.

He then joined forces with Harry Cripps (39* from 61) to post exactly 100 for the third wicket, to which he contributed 45 - he would eventually finish unbeaten on 61, from 103 balls.

You can watch Weybridge in action this midweek in the second round of the Surrey Championship T20 competition when Worcester Park come calling. Start time for that one is 6pm.