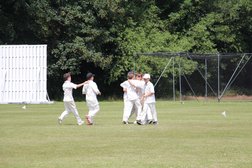 A trip to Chertsey was a daunting prospect for the under 12s, leaders Chertsey had only lost once - to us - before and had a formidable record of P8 W6 L1 T1 going into the game. The hosts kindly offered to field first while Lee proved that he's been listening intently to his South Western Railway training by delaying Charlie's departure by an hour.
Captain Zach (not Sparrow) opened up with Ary and revelled in his new found confidence with the bat, taking a boundary from each of the first 2 overs. The bowling was tight early on with little by way of extras, but the boys stuck to the task and showed that they are beginning to learn that they can't hit every ball for 4. 19 came from the first pair, followed by another 20 from Isaac and an ailing Ollie - bravely turning out despite a severe case of the lurgy. The second wicket partnership was notable for the shot of the day, Isaac drilling a straight drive past the bowler... nothing makes the coach smile like seeing a straight bat!
With a solid base laid by the first 4, real impetus was added by Max and Jake. Jake in particular punished anything on his legs, hitting 3 x fours in his innings top score of 17. Lucas and Arthur pushed the score along, before the last pair, Campbell and Charlie gave the boost needed to get the score over 300, ending with our biggest total of the season so far, 312 - aided by the loss of only 5 wickets.