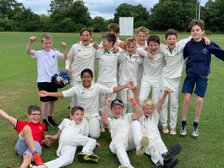 A bright sunny morning at the home of cricket (and rugby and netball) set the scene for the visit of Staines & Laleham. Skipper for the day, Lucas won the toss on a woefully underprepared wicket and elected to bat first, showing admirable confidence in his charges batting, which had of late been excellent.
During the pre match chat, the coach impressed on the boys the importance of playing straight on a wicket which was unlikely to have any bounce in it... unfortunately, that chat fell on quite a few deaf ears! The batting was a struggle throughout, wickets were tumbling constantly - 11 in all - and the less said about many of the shots played, the better. Stand out batters were Lucas (11), Charlie (17) and the last wicket pair of Leo (9) and Cass (10) who gave us a chance to post a defendable total of 270.
After some more words from the coach, this time a touch harsher! The boys set about defending the modest total, they would have to bowl and field to their absolute limits if they were to pull this one off...
Lucas's opening over was uncharacteristically wayward, but from the moment Leo bowled the opener in the second over the Vandals put in their best display in the field of the year (which is saying something as we've been excellent in that department all season). Charlie was in the thick of the action, first taking our second wicket by bowling the opener, following it up with an outstanding diving catch to dismiss the other opener from the bowling of Ollie... 212 off 4 overs.
Zach bowled the 5th over and got in on the act with 2 wickets, the first a lovely outswinger to take off stump, Isaac followed suit pegging back off stump again before Carter got in on the act courtesy of another good catch from Leo. Another batting pair were gone and they'd only added 2 runs in their partnership... 214 off 8 overs.
The wickets kept tumbling, and the fielding got even tighter, Daniel clean bowled one, and after 2 tight overs from Leo and Lucas, back came Charlie "Ben Stokes" Davidson, who got in on the act with a neatly taken caught and bowled. Staines were going nowhere and the V's were sensing victory... 220 off 12 overs
Ollie bowled another miserly over, conceding only 1 run, then Zach came in and took another good diving caught and bowled - disproving the myth that Powell's have Teflon coated hands! Cass followed with a wicket maiden, another good outswinger and Isaac came back to take his second victim of the match, again bowled. All of these wickets meant that Staines score had only gone up by 1 run from over 4 to over 16...213 off 16 overs.
That was the end of the wicket taking, 12 had fallen in all, and despite a late rally from Staines, they were well beaten in the end, queue the celebrations including the soaking of the coach - not cool children!!
MOM - Charlie Davidson - outstanding.
Share via
FacebookTwitter
https://www.pitchero.com/clubs
Recent news