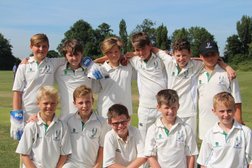 Mini V's win their 6th in a row

A short trip to Addlestone to visit St George's College, Weybridge (I'm guessing that the Geography department isn't their strongest!) was the latest challenge to face the under 12s. To date, the home side, Weybridge were the only team to beat us so this would be a good gauge of the progress we've made over the season.

Upon entering the college, we were shown to "Rob Hooper Field" - named after one of the College's biggest benefactors - and told that the hosts were a player short. With Ary there to support, he kindly offered to fill in for the oppo and we set about starting the game. Zach lost the toss and we were asked to field. With Campbell running on Davidson time, we had a sub fielder in the form of Baldwin jnr for the first few overs. The start was a little bit sleepy, the bowling was accurate enough but Weybridge took a lot of singles to fielders who were not on their toes. The first pair did a decent job, losing only one wicket - bowled by Ollie Butler.

The change of innings gave the boys a chance to get together and some honest words were exchanged, they knew that their fielding wasn't up to their normal standard and set about correcting it. From there on in, the result was something of a foregone conclusion. Wickets fell frequently, with the boys all getting in on the act, Lucas (3 for 5) including a great catch by Leo, Campbell (2 for 22), Isaac (1 for 5), Zach (2 for 8) and Carter (2 for 5) were the other wicket takers which put the target to chase at a mere 249, a really fine performance with the ball and lovely to see everyone contributing, even those not lucky enough to get wickets kept the run rate down with good accurate bowling backed up by good fielding.

Zach and Carter opened up and set about breaking the back of the chase, Zach continued to harness his new found confidence with willow in hand, getting 17 before getting what he described as a "good ball". Carter played a doozy of a shot back over the bowlers head for 4 to highlight his new attacking game. Charlie and Lucas consolidated the innings and got us up to parity with the hosts, Lucas playing another beautiful drive over the top for 4 before Boom Boom lived up to his nickname again but smashing 23 some brutally powerful hitting. At this stage, the Weybridge boys' heads had dropped and the formality of victory was assured. Ollie (17) still showed off some interesting shots to frustrate the Weybridge bowler who he outside edged and inside edged for 4 in consecutive balls.

All of which meant that the Vandals exacted revenge for their opening week defeat by winning by 62 runs and claim the title of best team in Weybridge!