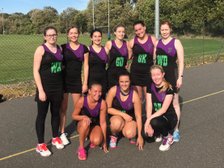 Starting as we mean to go on!

Despite the shaky start to the game, Vandals secured a very convincing 32-28 victory at the weekend. The first game back is always the toughest, made harder by the fact that we hadn’t played together before and many of us were playing in unfamiliar positions. Seymours came out strong, leaving the court at quarter time with a 12-6 lead.

Taking on board the feedback from the team talk, we changed our play by adapting the ball movement and pace as well as working as a team to get in better positions on court. The centre court and attacking players drove the ball into the shooting circle, whilst our shooters took every opportunity possible to secure another goal. At the other end of the court the defensive team made it extremely difficult for the opposition to even get a touch on the ball with a number of incredible interceptions and tips. Strong turnovers made their way smoothly down the court resulting in our overall win.
To quote Rachel – “Seymours didn’t lose that game, we won it”

Thank you too all the girls who played and put in 110% effort on court, as well as a massive thank you to Rachel and Michelle for their off-court support and encouragement!