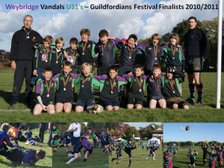 Well done Vandals, more wins, more medals and another trophy to add to the cabinet............

Sunday October 24th finally saw the U11’s trek down the A3 to the Guildfordians festival. The original festival was cancelled due to adverse weather conditions and their pitches being flooded. However 2nd time lucky as the weather was kind to us this time, heavy rain to soften the ground on the Saturday followed by sunshine on the Sunday, the perfect conditions for rugby.

The Vandals warm up helped shake the pre match nerves and wake the team up. The Guildfordians festival was a straight knock out competition with trophies being awarded for first, second and third places. Two pools were drawn which meant we were up against the hosts Guildfordians, Cobham, Bracknell & Rosyln Park. Rosyln Park and Cobham are very strong sides, Roslyn Park are a semi professional senior club and Cobham (our local rivals) have a huge pool of players to call upon.

The team were a bit restless and conceded an early try, however their eagerness to get involved and control the game settled the team.....The Vandals patience paid off, the team cranked up the pressure and they started the fight back. After a few minutes of controlled rucking and quick hands the Vandals crashed over the try line to level the score at one a piece. The second half saw the team came back out all guns blazing, however after 2 disallowed tries the game ended in a draw.

The U11’s took to the pitch with a total disregard for Cobham’s abilities and started to control the game. However the Vandals were not fully awake yet and Cobham took the lead. The Vandals dug deep and quickly took the game to 3 apiece, much to the disgust of Cobham’s coaching team. Cobham were not taking this lightly and fought back with everything they had, the Vandals caught the opposition off guard and went over the try line to make the score 4 – 3. With only minutes remaining on the clock the Vandals held Cobham back to take a well earned victory. It would be fair to say that the Cobham coaching team were not pleased to lose the game...Oh dear..! The Vandals were now firing.

Now this is where it got interesting, Chris had done the maths and worked out that we must beat Bracknell by 6 tries and to concede as little as possible if were we to compete in the play offs. The team took to the field safe in the knowledge that all they had to do was score a try every 2.3 minutes and to hold Bracknell from scoring for the full 14 minutes!
Some well worked forwards moves combined with the backs took the vandals in to the lead 1 - 0, Bracknell had a few fast players and threatened to break our line but our defences held strong, some clever kicking and chasing caught the Bracknell backs napping and the team went over for another try 2 – 0 to Vandals on the stroke of half time.
Now this left the Vandals to score 4 tries in less than 7 minutes! The team took to the field fired and ready to work their magic, within a few minutes the 3rd try came, followed by a fourth. Again Bracknell were not looking to give the game up and threw everything they had to claw a try back, however this was not to be their day. The Vandals cranked up the pressure and took another try to take the score to 5 – 0, the clock was ticking fast and with 30 seconds on the clock the Vandals won a scrum on Bracknell’s 5 metre line. The forwards stepped up with an “Ork” like terror and the backs were set ready for a blitz attack. As expected the pack won the scrum, the ball was held at the base and spun quickly to the backs, a well worked pass from fly half to the centre saw us break the gain line, Bracknell’s defence could not stop the Vandals drive and the team took the score to 6 – 0! At that point the whistle went and the team went mental, one more game to win then we would make the play off.

After a well earned rest the Vandals stepped on to the field to take on the mighty Roslyn Park. This was a must win game, all the team needed to do was to beat Roslyn by one try and again concede as little as possible. Not to be dismayed by their senior clubs semi professional status the Vandals fired themselves up to start the game. Within in minutes the pack had taken control of the rucks and mauls and the backs were feeding the ball through quick hands and the hard work paid off 1 – 0 to the Vandals. The team again increased the pressure and took another well earned try, Rosyln’s coaches much like Cobham’s were incensed with the Vandals and their own players. This was not in their script, the Vandals were not meant to be 2 tries up.
Half time came round and the Vandals were fighting to get the game back on, the coaches half time pep talk consisted of “ just keep doing what you’re doing”. The team ripped the script up completely by taking another well earned try, after a few crucial tackles by both teams the final whistle blew. Final score 3 – 0 to the Vandals.

The tournament scores were now all in and it was now a question of waiting to see if we had done enough to make the play off, after a few minutes we were told that unfortunately the Vandal’s did not make the play offs, instead the teams efforts had propelled them to top their pool which meant we were in the FINAL!!!!!!!!!!!!!!!!

The final saw the Vandals RFC meet Brighton RFC, a team that had been together for several years and who have been winning tournaments across the South of England for some time. Now this is where it gets sketchy for me as I had to ref the playoff game. I joined the game with minutes to spare of the second half, unfortunately Brighton took the honours on this occasion to win the final.

However the Vandals performance throughout the day was superb, the bench mark has been set for the season very early on and the team have definitely started where they left off. Every player got stuck in and gave their all. The team’s fantastic achievement is a credit to each and every player’s individual efforts; they really earned their medals and most of all the trophy. The forwards were powerful, the scrums were a sure bet, the line out catch and drive was working like clockwork and the rucking was superb. The backs were securing the ball and shipping it out to create space, the kicks were well placed, well timed, accurate and most of all extremely effective.

Vandals team on the day and Man of the Match:

Lastly, a huge thanks to all the parents for their ongoing support on and off the pitch and for reserving their vocal judgement on some of the many dubious refereeing decisions made on the day!

Quote of the day: It does not matter if we knock the ball on, we win every scrum anyway!. Ieuan Thomas.

Roll on the next tournament........Festival ......Competitive match........Training Session or any other way we can squeeze in the glorious game of rugby!