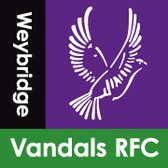 Vandals Teams get back onto the Pitch at last.... Reports by John Farrow.......

Cranleigh 14pts Weybridge Vandals 26pts
Following their emphatic win over Effingham and Leatherhead last week, Vandals again came out on top when they travelled to Cranley, but this time it was much closer contest with the home side providing much sterner opposition. It wasn't until Vandals that opened up a 19 point lead that victory seemed assured, and even then, they had to pull out all the stops defensively, as their opponents piled on the pressure and deservedly scored a second try.

Early possession went Cranleigh’s way, but a thumping tackle tore the ball loose, and Vandals Callum Mitchell pounced, and his searing speed saw him bearing down on the try line for the opening score which Troy Bolger converted. Two penalties in quick succession sore Vandals back on the attack with John Dixon at the helm. Excellent rucking technique gave them more quality possession, and prop Joe Edwards used his strength to power over for the team's second try which was again converted this time by Tom Bolger, who followed up a strong run from midfield. George Shannon continued Vandals attacking game as he drove deep into the heart of Cranleigh’s defence, and the pressure was maintained by the elusive skills of George Bolster. Cranleigh defended well and they showed their willingness to attack from deep, which eventually gave them a well-deserved converted try.
Vandals quickly regained the initiative with Will Gibson-Hunt driving over for the try, taking the game further away from the home side. Vandals continued to win plenty of Phase ball and the constant flow possession resulted in a well-deserved try by young Luke Dones . Cranleigh who had been competitive throughout stormed back and went over for a second converted try in the last minutes of the game.
Apart from the penalty count against them and their Lineout not always functioning, which will be addressed by the coaches, this was another satisfying win for Vandals, especially when it is very much a second team squad that had taken the field.

Richmond Saxons 14pts Weybridge Vandals 5pts
Having supported the ‘B’ squad in Friday night's victory at Cranley, Vandals ‘A’ team travelled a short distance to Richmond RFC, a club well known for producing international players such as Ben Clarke of England, and Scot Quinnell of Wales. And whilst the Saxons did not have players who have represented their country at the top level, they did have a sprinkling of those who have played in Richmond's National Championship side, including an outstanding backrow player and a lightning quick winger. The opposition were all round way above what Vandals faced against Cranleigh but although they conceded two converted tries in the opening 17 minutes they tightened their defence to such an extent that Richmond were unable to score again. They mounted attack after attack, but found Vandals line impregnable for the rest of the match. This was a tremendous achievement and a huge effort, rightly praised by head coach Damian Porter. Turning round at half time only 14 points adrift Vandals were very much in the game and were optimistic that, if they got to score early in the second half, they could at least grab a share of the spoils, and when George Shannon swooped and touched down for his second try in two matches Vandals hopes and desire soared.
Richmond were now on the receiving end as their defensive work was being fully tested, both by Vandal’s forwards in the close exchanges and when they moved the ball in the backs. The final whistle must have been a relief for Richmond, who must have felt, after scoring those two early tries, they were going to cruise to an easy victory. Their attitude soon changed when they encountered Vandal’s tenacity, determination, and sheer refusal to go down.
Porter was delighted with the overall performance of the Vandal’s players particularly with their massive defensive effort, and he had special praise for Josh Thomas Connor, Callum Hennessy, Luke Hempstead, and Paddy Saphir.
Vandals can look forward to hosting Teddington RFC in a floodlit match on Friday the 28th of May, have felt and feel confident that victory is well within their range.

Weybridge Vandals u16s 5pts, Camberley u16s 12pts
In a tight and often scrappy encounter Camberley, having come from behind, snatched victory in the last minutes of the game. They were good passages of play from both sides and plenty of commitment at the breakdown leading to a number of turnovers, and Vandals won plenty of possession at the ruck. They were perhaps guilty of using ‘route one’ too often, when moving the ball wider and into space would have been more profitable than led to more than the one try that they scored.
Vandals began in a determined fashion with plenty of possession than being awarded a number of penalties, but could not get the breakthrough. At lovely break by William Harvey maintain Vandals thrust from what for that early try, and they eventually went ahead when George Wicker burst through for the score, but despite continuing to have territorial advantage they were unable to strengthen their lead. Camberley threatened with a quick hands and opening up space come up but Vandals defended in a determined fashion, with aggressive tackling which kept Camberley at bay. The game played in 4 x15 minutes periods, followed the pattern of last weeks match between the same clubs, with Camberley winning narrowly and as if this return fixture progressed it was the visitors who threatened more, and having got on level terms when a kick ahead led to a fortuitous bounce into the hands of a player following up to race in for the try, Camberley sensed they could get a second victory. Vandals defended stoutly again and showed great zest to run the ball out of defence, but losing the ball at the breakdown led to a final surging attack from Camberley. Vandals held them up again and again showing their defensive qualities, but Camberley prevailed with a powerful driving maul and then breaking off to pounce for the winning try. Vandals try was scored by Oscar Ben Hall, and man of the match was winger Jamie O Sullivan.
The team will play Teddington on Friday evening at Brownacres under the Vandals floodlights