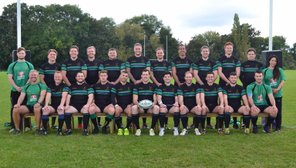 Weybridge Vandals U16 24 pts Teddington U16 20 points ,
The result of this pulsating game was in doubt until the last minute, with Teddington launching one final attack but Vandals what a crucial turnover to boot the ball into touch and secure the victory.
The windy conditions were not conducive to running rugby but both sides attempted to get their backlines on the attack. Vandals created and early pressure with consecutive penalties but were unable to convert into points. Ben Witham made a great break from full back as did centre Henry Gulliver, but it was Teddington who went ahead following line out possession. Vandals initially kept their line intact but were then penalised for deliberate offside resulting in a penalty try. They quickly redressed the balance with Gulliver surging over for Ed Rawlings to convert to bring the scores level. A Brilliant run out of defence by Jayrah Stewart gave Vandals the second score to give them the lead which they held up until half time courtesy of some solid defence.
Teddington wanted early penalty on the resumption which they converted with an unconventional manner that drop goal. This was quickly cancelled out with a Rawlings penalty but Teddington were looking dangerous on the counter attack and after plenty of phase ball they crashed over for a try in the corner, to bring them 2 points adrift of Vandals, at 17 points to 15.
They piled on the pressure, but Vandals defended well, winning the another turnover which saw Witham sprint away for a superb individual try which Rawlings is converted to take the score line to 24 ptss to 15. There was still plenty of time remaining and when Teddington were awarded a turnover they used it wisely to create an excellent try, and leave Vandals with an anxious few minutes to see out the game. This they did and they could be well satisfied with a hard fought win.
Share via
FacebookTwitter
https://www.pitchero.com/clubs
Recent news