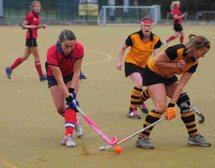 WEYMOUTH Ladies were keen to get their first home game of the season underway and wipe out the memories of last week’s heavy defeat.

WEYMOUTH Ladies were keen to get their first home game of the season underway and wipe out the memories of last week’s heavy defeat.

Captain Wendy Butcher’s motivational speech at the start helped get the team ready and focused.

The home side took control and had the majority of the play early in the game.

The midfield three of Casey Foot, Jo Brazier and Butcher linked up well and looked strong.

Fifteen minutes into the game, Lynda Drewitt pounced on a defensive error, with still plenty to do, she dribbled into the D and beat the keeper clinically.

Weymouth kept up the pressure with Sophie Foot and Jacqui Ridlar forming a very strong defensive duo and stopping any danger coming from ISCA.

Drewitt had a great shot saved by the keeper and Weymouth had a number of penalty corners they couldn’t convert.

They were close to going into half-time disappointed until Brazier fed a great ball down the line to Emily Austin who cut in from the back line and scored past the goalkeeper with a reverse shot.

In the second half, Weymouth took their foot off the gas and their play started to become scrappy.

ISCA did come into the game more but the Weymouth defence stood strong and the visitors never looked liked scoring. The few times they did get into the D, goalkeeper Megan Eadon-Turner stopped everything confidently.

Player of the match Sophie Foot, looking super fit this season, had a great game in defence — never looked stretched and her cool head had a calming effect on the rest of the defence.

Katy Ninham did some great running and hassling up front alongside debutante Jess Neville.

A good one-two led to a great chance for Butcher near the end of the game. She skilfully lifted the ball towards goal only for the keeper to make another good save.

Weymouth came away happy to have got the three points but with still plenty to work on for the season.

Player of the Match: Sophie Foot