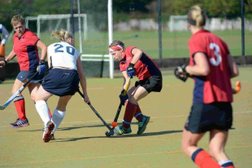 WEYMOUTH had no answer to highflyers Teign who finished third in the league last season.

WEYMOUTH had no answer to highflyers Teign who finished third in the league last season.

The Seasiders made an early start to head down to Dawlish for a much anticipated game against a team renowned for their speed, determination and vitally their team cohesion and work ethos.

The hosts shone from the very beginning scoring an early goal from a one-on-one with the goalkeeper.

At this point, Weymouth started to switch on and anticipate many of Teign’s plays preventing them from scoring another goal for about 20 minutes.

During this time, the visitors showed some promising play without team captain Wendy Butcher who had to go off due to a head collision but, after a quick break, she was back on supporting the team and really gelling everyone back together.

Weymouth and their player of the match, Jacqui Ridlar, held back the Teign attack and helped to create some attacking opportunities but unfortunately didn’t have the finishing ability to convert their attacks.

Throughout the remaining first half, Teign continued to work well and link their plays creating many shots on goal scoring three more, one an amazing left-hand top corner goal.

Weymouth returned after the break ready to put up a fight and that they did so for the first 25 minutes.

Annalise Dive, on her debut for the first team, created some great play on the left-hand side and linked well with the midfield and attack.

After this, Teign scored their first goal of the half and fifth of the match, it was at this point that Weymouth’s heads went down.

The hosts went on to score two more in quick succession, one resulting from a well-played and placed aerial pass from Teign’s midfield to attack.

Towards the end, Weymouth started to become more focused and really fought for the ball which created some shooting opportunities but, unfortunately for them, it was too late as they had been outclassed and outplayed by a better team on the day.

Player of the match: Jacqui Ridlar