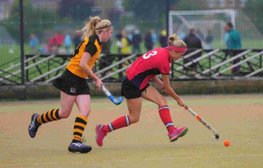 EMILY Austin’s last-ditch goal gave Weymouth a deserved three points away to Falmouth in Premier Division 2B of the West Clubs Women’s League.

EMILY Austin’s last-ditch goal gave Weymouth a deserved three points away to Falmouth in Premier Division 2B of the West Clubs Women’s League.

Falmouth came out fighting from the very beginning but the visitors were more than a match for them and ran rings around the home defence.

Neat play between Lynda Drewitt and Jo Brazier put Austin in down the right and she meandered into the D before hitting a phenomenal reverse-stick shot into the bottom corner.

Player of the match Katie Ninham did a fantastic job for the Seasiders up front, while vice-captain Brazier received a green card for a stick tackle.

After a quick break and inspirational team talk from captain Wendy Butcher, the second half began with Weymouth coming out determined to add to their lead. It didn’t take long for newcomer Jess Neville to score a cheeky goal from a well-worked attack between Gina Brown and Austin.

The latter’s cross into the circle allowed Neville to make it 2-0 to the away side.

Falmouth came back strongly and Weymouth lost their composure for a time, resulting in two quick goals for the hosts and a second green card for Weymouth, this one going to Neville.

Then, with time running out, Austin stepped up to the plate to score her second of the match and seal the win for Weymouth.

Player of the match: Katie Ninham