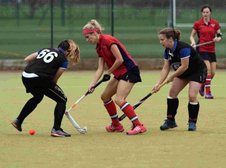 With the two teams on equal points coming into the match, both sides knew that whoever emerged the winner would have truly earned it.

With the two teams on equal points coming into the match, both sides knew that whoever emerged the winner would have truly earned it. Captain Wendy Butcher was keen to make the most of her largely available squad, with regular substitutions being a major advantage over the visitors.

Weymouth started strong with Gina Brown and Jo Brazier working well together to provide threatening through balls to forwards Lynda Drewitt and Emily Austin. Drewitt and Austin together used their skill and experience to create numerous shooting opportunities which certainly woke the visitors up after their long journey. Newquay bounced back quickly and applied pressure onto the Weymouth defence through smooth play which left the Weymouth defence under attack, but thanks to numerous astounding saves from keeper Megan Eadon-Turner and a goal line sweep from Alice Craven, the home side were able to keep morale high and stay focused. A clearance from Craven reached Butcher who delivered it to Austin on the wing who was able to outskill the defence to make the score line 1-0 up with 2 minutes left of the first half.

The second half saw the home side come out firing, eager to extend their lead and they did so in less than ten minutes of returning to the pitch. A poor clearance from a Newquay defender reached Austin’s stick who found Drewitt lurking near the back post who with a James Bond like roll fired it home to give Weymouth the 2-0 lead. Possession remained in the attacking half with the visitors defence becoming strained, tension rose within the Newquay defence after a shot at goal from Katie Ninham was stopped illegally resulting in a penalty flick. Butcher stepped up to take the flick but uncharacteristically failed to reach the target. The visitors responded quickly to this and a quick break saw them bring the score line up to 2-1. Butcher immediately redeemed herself and converted a straight strike from a polished Weymouth short corner routine making the score line 3-1. The visitors made a last ditch attempt to reduce the goal difference and this time were successful. Solid midfield work from Casey Foot ensured that the ball was kept in Weymouth’s possession only, preventing Newquay from bringing the score back any further.

Player of the match: Megan Eadon-Turner