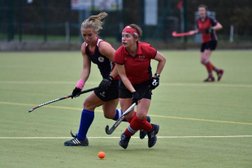 WEYMOUTH had to make do with a share of the spoils in the Premier Division 2B clash with Kingsbridge & Salcombe at Redlands.

The visitors started the day one point ahead of the Seasiders in the table, and that was how it remained by the end of play.

The hosts got off to a strong start with some good attacking play, especially on the right-hand side where Emily Austin’s hard work resulted in numerous short corners.

But good defensive work from the away team kept the Seasiders out.

That was until another short corner fell to home captain Wendy Butcher and she swept in a reverse hit that came off a defender. Weymouth’s goal gave them a 1-0 half-time lead at the half-time whistle.

At the beginning of the second half it was the visitors that came out the stronger, and within 10 minutes they earned themselves a short corner.

Despite an initial save by keeper Megan Eadon-Turner, and great defending by Alice Craven and Luce Byrne, the visitors managed to break broke through and to make it 1-1.

Kingsbridge & Salcombe applied more pressure after levelling but their attacks were met head on by a confident defence that dealt with every break.

There were numerous well-timed tackles by player of the match Anneka Rogers.

Weymouth made strong breaks down the right using the strength of Gina Brown and Jo Brazier and the speed of Austin.

They linked up with Lynda Drewitt in the D but unfortunately for Weymouth the visitors were quick to block any shots on goal.

The last five minutes saw some of Weymouth’s strongest play.

Immense pressure from Sophie Foot on the left saw her link with the forwards, leading to a last-minute short corner. But despite all of Weymouth’s best efforts, they couldn’t find a winning goal.

However, Weymouth had earned themselves a deserved point going into the Christmas break.

Player of the match: Anneka Rogers