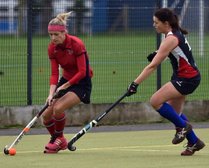 WEYMOUTH were very much the underdogs in this return fixture after losing 7-1 to Blandford & Sturminster Newton in the opening game of the season.

WEYMOUTH were very much the underdogs in this return fixture after losing 7-1 to Blandford & Sturminster Newton in the opening game of the season.

Both teams came out attacking and at the very end of a tense first half, Weymouth scored.

Casey Foot passed a sideline ball to Sophie Foot who dribbled along the top of the D and sent a cracking shot past the keeper into the bottom corner.

Blandford equalised early in the second half, scoring a penalty corner to make it 1-1.

Five minutes later the Weymouth defence conceded possession and the visitors took advantage to go ahead.

Lynda Drewitt then scored a great goal to level things up but the effort was disallowed after the ball hit a foot.

Home midfielder Anneka Rogers found Emily Austin, she drew the keeper out of the goal and fired the ball into the back of the net for 2-2.

Sophie Foot, in her debut season as a forward, then scored her second.

Receiving the ball on the penalty spot from Austin, she hit a shot past the advancing keeper to give the hosts the lead again.

In the final minute of the game Weymouth gave away a penalty corner, but the shot was cleared out of the D by a composed defence.

Player of the match: Sophie Foot