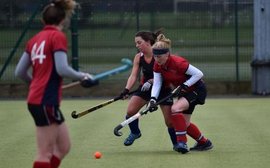 WEYMOUTH travelled to Exeter with quiet resolve to gain another three points and got their reward with two second-half strikes.

WEYMOUTH travelled to Exeter with quiet resolve to gain another three points and got their reward with two second-half strikes.

The game began with ISCA’s defence using the full width of the pitch giving the Weymouth attack the run-around.

Weymouth gradually came into the game and had a few chances in the first half but the ISCA goalkeeper made some superb interceptions and saves.

The deadlock was broken early in the second half when he Seasiders’ left midfielder Casey Foot found Lynda Drewitt out on the wing, who passed the ball to Emily Austin lurking on the top of the D.

Austin controlled it sweetly and hit a shot cleanly into the goal to open the visitors’ account.

ISCA produced a few counter-attacks but the Weymouth defence remained strong with goalkeeper Megan Eadon-Turner making a couple of great saves to keep a clean sheet.

The player of the match vote was widely split, indicating that it was very much a whole squad performance, with Casey Foot pipping it for showing grit and determination in midfield.

Player of the match: Casey Foot