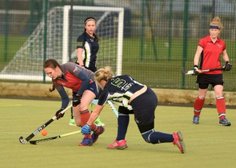 WEYMOUTH suffered another thumping from Teign after losing 7-0 earlier in the season.

WEYMOUTH suffered another thumping from Teign after losing 7-0 earlier in the season.

After two previous wins and a strong squad available, Weymouth went into the game with confidence, but were hit by an early blow.

Almost immediately, the away team broke quickly and planted the ball into the back of the goal, catching the Seasiders’ defenders and keeper off guard.

After the first goal against them, the home team lost their confidence and, as a result, their concentration suffered.

Teign took advantage of the breakdown in play and put another strike into the back of the net.

The rest of the first half saw excellent play from both sides, with good attacking play down the right between skipper Wendy Butcher and Emily Austin.

The midfield, particularly player of the match Casey Foot, was consistent in breaking down the oppositions’ attacks and feeding the ball to the forwards.

Just before the half-time whistle and following a controversial umpiring decision, Teign put a third past the keeper.

The second half saw some promising play from the Seasiders, which was demonstrated by a sweeping goal from Anneka Rogers.

Unfortunately, the home side couldn’t hold off the attacks from Teign and the visitors netted three more.

The final score was 6-1 to the away team.

Player of the match: Casey Foot